Black Morrefus (pronounced Black Moar-fuss) is an upcoming game by APIM Group, Inc. It is about the kid Morrefus Morris Shifton, who has for a Gray Morrefus a dark skin, a seventh limb and no gloss, being bullied about it at school, but one day, the destiny of his planet is in his hands limbs.

It may be for the Wii U.

Morris Shifton is a Morrefus with strange quirks. Unlike any other Gray Morrefus, his skin was dark, he had seven limbs and has no gloss. The kids at school bully him for these reasons and call him a Black Morrefus.

Morris is madly in love with the Gray Morrefus Molly Formine. He knows he has no chance, however. Molly is the most popular girl of class and all the handsome, quirk-less Morrefi kids want to date her. Molly does have feelings for Morris, however, but doesn't know any way how to express them.

This scenario kept on since Morris first went to school. Until one day...

Strange things happened outside when Morris woke up that morning. The sky had a different color and a black void was across from the shining sun. He hoped that his parents could explain anything, but they went missing.

At school, a lot was revealed: an evil sorcerer known as Vargenzodd captured all the adult Gray Morrefi with a spell, and was about to catch the children as well (that spell apparently didn't work on kids). Morris saw Molly in Vargenzodd's hand, and a bunch of other kids. Molly seemed to be glad to see Morris showing up. With another spell, Vargenzodd locked the six limbs of the four remaining Morrefi (including Morris) with handcuff-like chains. Vargenzodd forgot to do this to Morris' seventh limb as well, and as Morris realized that, he freed himself and the other four in time, and punched Vargenzodd in his face, hoping that he'd release all the Morrefi kids. Vargenzodd is not that weak, but retreated anyway, claiming that his plot will succeed anyway.

Morris asked the other three Morrefi what the sorcerer meant. Rocky Punchback, a Morrefus that likes to sport, says that Vargenzodd wants to destroy the Morrefi and other inhabitants of planet Blobz. Rocky used to pick on Morris, but he regrets a little after Morris saved him from Vargenzodd, for now. Casey Specframe, a smart Morrefus girl, claims that Vargenzodd said something about the black void Morris saw earlier. When the void blocks the sun, it is said something terrible might happen. Why is unknown. Brandon Bland suggests that Morris should save the other people and emphasized the punch in Vargenzodd's face. Morris doesn't know, but Brandon said to look around - the city is deserted. Brandon also fears the red, blue, green and yellow Morrefi are also captured. Morris decides to go along with him, Rocky and Casey, and save the Morrefi.

Black Morrefus is a 2D platformer that plays similar as Kirby's Epic Yarn and Cave Story.

At any action that Morris does, he can morph into something that fits with the action. For example, when Morris runs, he transforms into a car. When he jumps, he temporarily morphs into a spring and when the Jump button is hold in the air, he transforms into a tiny ball with a big parachute.

Morris' basic attack is his Telepunch: he extends one of his limbs. Holding the attack button longer, and he has a longer reach. This attack cannot level up, but uses no ammo.

Morris may find a Teach Scroll, which lets him learn a new attack or ability, like the Big Cannon or the Swimming Fish. Morris can also find a SuperMorpher, which lets him transform into something that is powerful or handy, but temporarily (like a MacroTank or Mole Drill). When coming across a Demorpher, Morris returns to his original form.

When Morris gets hurt, he will lose some health, some EXP of his current attack and some Jewels, which gives points. The same applies when Morris falls into a pit. Losing too much EXP makes his attack Level Down and losing too much health makes Morris lose a Life, and respawn on the latest checkpoint. It is a Game Over when all Lives are lost. 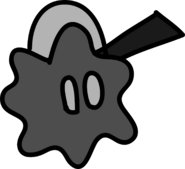 The five types of Morrefus
Add a photo to this gallery
Retrieved from "https://fantendo.fandom.com/wiki/Black_Morrefus?oldid=2662392"
Community content is available under CC-BY-SA unless otherwise noted.