Start a Wiki
The Black Mage is a character class in the Final Fantasy Series, which is made by the 3rd Party Company, Square Enix. Black Mage first appeared in the original Final Fantasy, made for the NES, where he acted as a character class that players could choose. Black Mage is a master at black magic, which means, he can use many damaging spell moves. The most powerful of these moves, is the Meteor Shot. They are the exact opposites of White Mage, although, both of them are hero characters. Although Black Mages have become scarce in the Final Fantasy series, they have made recent appearances in Nintendo Crossovers.

Arlen, the main villain of the game, is a black mage. He seeks to use the power of the User Crystal to take over Iliana.

Black Mage is a playable party meber that joins your party in Midgar.

Black Mage is an unlockable character. He uses various magical spells and is fast.

Black Mage, is All Round character.

Black Mage made an apperance in Mario Kart Duo in team called Sports Mix with Ninja. 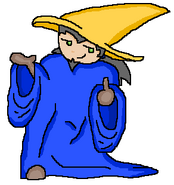 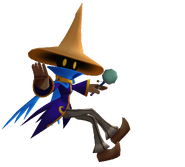 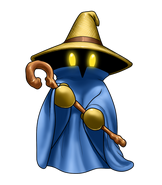 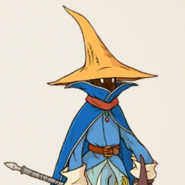 Add a photo to this gallery
Retrieved from "https://fantendo.fandom.com/wiki/Black_Mage?oldid=3169205"
Community content is available under CC-BY-SA unless otherwise noted.