Birdo, or Birdetta as she prefers to be called, is a member of the Birdo clan who first appeared in Super Mario Bros. 2 as a resident of Subcon and a lackey of Wart. Since then, however, she has turned good and moved to the Mushroom Kingdom in the hopes of starting fresh. It is subjective whether she is the legal guardian of Pirto, whom she often cares for like her child. She is often teamed up with Yoshi in various sports games and otherwise, and the two are rumored to be in a romantic relationship.

Birdo is very determined and confident in all aspects of her life. She is also very feminine, often doing girlish poses to show her elegance, and she often uses this to her advantage. Relationships and crushes are a big part of her life, as evidenced by previous relationships with the Beanbean thief Popple, and she is always looking for love, being very flirtatious.

Birdo is confirmed to appear in Super Mario Legends: Saga of Evil, as evident of new official artwork. It is unknown what her role is however.

Birdo is a playable character in Mario's Batter-Up Baseball. Here are her stats:

Birdo appears in Mario Guitar World as the 3rd boss in story mode on Pro. If she is beaten, Birdo will be unlocked as well as other features.

Birdo is a player on the Yoshi Eggs team on the multi-player Wii sports game Mario Rugby League. She is a strong and speedy character with poor skill. Her special skill is to swallow the ball and shoot it forward, this is a pass only. You can pass her to players at the other end of the field.

In Mario Singalong Legends! to unlock her you must sing both "Papa Don't Preach" by Madonna and "Son Of A Preacher Man" by Dusty Springfield with Yoshi at least once.

Birdo appears in Eevee's Story in Pikachu's Final Destiny 2 as a supporting character. She tells Eevee about Jigglypuff has stolen her purple dress when she is walking in the woods. After you find her dress, she will give Eevee a Big Red Bow.

Birdo is a NPC in Super Princess Peach: Mushroom Kingdom's Drought She is only seen in Yoshi's Island in a cutscene with a pink Baby Birdo, but her species is seen as an enemy that launches eggs out of its mouth. Birdo barely has an appearance in this game, but her species has multiple appearances.

Birdo appears as a starter character and a captain in Super Mario Rocket Baseball. Unlike previous titles Birdo has alternate colours that can be unlocked.

Birdo makes her first Paper Mario appearance in Paper Mario: The Sage's Quest. In this game she is battled in Juniper Jungle. She expresses frustration as she was kicked out of Juniper Village because they were suspicious of her being linked to Bowser. After the battle, she stubbornly says she wont budge until she can go back to Juniper Village. Mario must then talk to Yoshi and explain the situation. Yoshi allows Birdo back into the village, and Mario continues into Juniper Valley. Strangely, this Birdo is supposed to be the character Birdo, yet she lacks the ring she usually sports.

Another Birdo appears later on in Chapter 7 in the Frozen Sanctuary called Blizzard Birdo. This Birdo is one of Bowser's minions, as opposed to Birdo.

“Toadstool is playing Mario, big-time. Not only him, but the entire Mushroom Kingdom! I’m like, the only one who was able to see through her charade from the beginning! Yeah, you know how Bowser somehow has eight kids, but no one knows who the mother is? Gee, I wonder why?”
— Legend of the Chaos Star Part 11

Birdo appears in Super Mario Bros.: Legend of the Chaos Star as one of the protagonists. Birdo's initial appearance was the first chapter, where she, alongside Yoshi and Toad, tagged along with Mario and Luigi in order to save Princess Peach, who had gotten herself kidnapped by Bowser again. In the eleventh chapter, Birdo, after the heroes split into groups, tagged along with Donkey Kong and Diddy Kong (who were soon followed by a reluctant Cranky Kong) at Iggy Koopa's castle in hopes of obtaining one of the eight mystical Purity Stars, which were needed in order to combat the destructive power of the Chaos Star and save the universe from destruction.

Despite coming to her rescue in the first chapter, it's been shown throughout the story that Birdo harbors a severe, one-sided grudge against Princess Peach, often claiming that Bowser's frequent kidnappings of the latter were staged, and that the two of them have something going on behind the scenes. Birdo's dislike of the Princess also stems from the events of Mario & Luigi: Superstar Saga, where she ended up losing her voice to Cackletta and Fawful due to apparently being forced to pose as Princess Peach.

Birdo appears in this crossover game as a Gym Leader who specializes in cute Normal-type Pokémon. She is found in the second gym's door, but she only accepts a challenge from trainers who have the "Egg Power". The player have to go to the next gym, defeat Yoshi and get the Egg Badge. Then, Yoshi says that the player have the "Egg Power". Now, the player can back to challenge Birdo. After being defeated, she'll give the Ribbon Badge, $3,500.00 and TM10 (Hidden Power) as prizes. Also, she gives a hint about the Royal 4: "Do not understimate cute Pokémon. They can be really strong. As everyone knows, the three ladies from Royal 4 use pretty Pokémon, so do not judge a book by its cover...". If the player talks to her again, she'll give a Lucky Egg. If the player uses one of certain amiibo, she will give $4,200.00 instead of usual $3,500.00.

Birdo appears as the shopkeeper in Yoshi's Quest. She sells Yoshi items and new moves. She appears to flirt with Yoshi while he shops. She appears to be one of the only residents of Koopa Island that isn't hostile to Yoshi in any way. This also appears to be the first time she and Yoshi met, as when Yoshi first visits the shop, Birdo introduces herself, although in previous games, the two are considered partners.

Birdo makes appears in Dry Bones Party 4, as an unlockable character. Unlike most other games, Birdo is male in this title and speaks with a deep voice. He can be unlocked by defeating Baby Peach in her boss minigame: Baby Peach's Mystic Match-Em' Up.

Birdo appears as a playable character in Super Mario Spikers, appearing as a Balanced-type Captain. Her outfit consists of a gray full-body jumpsuit with purple stripes and wristbands. Her emblem is her bow, as in other Mario games, and her theme is Avant-Grande.

Birdo appears in Mario Hoops 3-On-3 Switch as a playable character. She is an All-Around character type and her special move is Egg Shot. She is a starter character. Her default partner is Yoshi. Her team name is the Birdo Bows.

Birdo appears as the main protagonist in Birdo's Beautiful Quest. Yoshi finds out after doing some reasearch that the Birdo is the natural enemy of the Yoshi. So he plans to get rid of her for good by tossing a Yoshi Egg at her. This cause poor Birdo to go flying all the way to Bowser's Castle. When Birdo arrives at Bowser's Castle, she develops a relationship with Kamek. The two were about to head to the park for their first date, however Kamek gets captured by his ex-girlfriend, Miss. Kamesly, so now Birdo must rescue her little "Kammy Poo" with the help of her and Kamek's elderly son from the future, Bamek. After Birdo beats Bashful Bowser and rescues Kamek, the two go to the park to start their first date while Bamek returns to his own time period. The final level has Birdo trying to avoid Yoshi's attacks, who is trying to get rid of her for good when he finds out she is still alive. After she passes this level, Yoshi decides to stop going after her for now, finally ending Birdo's adventure. 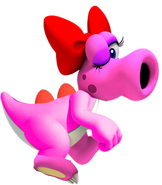 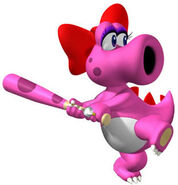 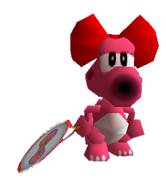 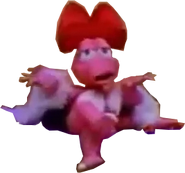 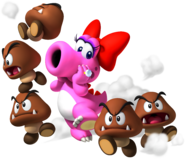 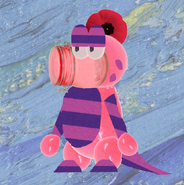 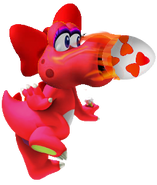 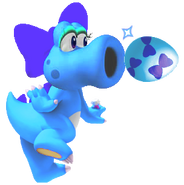 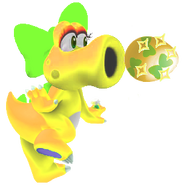 Birdo (In a Skirt/Tutu)

Birdo in her rabbit costume.
Add a photo to this gallery
Retrieved from "https://fantendo.fandom.com/wiki/Birdo?oldid=3335313"
Community content is available under CC-BY-SA unless otherwise noted.