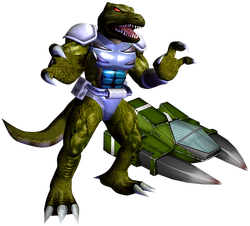 Bio Rex is a genetically engineered creature designed by the Keerlon Corporation who appears in the F-Zero series as a racer.

Bio-Rex's creation is the result of genetic manipulation research that was outlawed on Earth centuries ago. He was created from the DNA of a fossilized dinosaur egg, but altered to have human-level intelligence and increased strength. The genetic design allowed for the development of higher brain functions equivalent to that of a human.

Before he even got to race, however, he had to go through several press conferences, public appearances, and interviews. Under the constant public scrunity, he broke patience and his tempered flared up to cause bad press for the Keerlon Corporation. Bio-Rex was still determined to race, however, and entered the Grand Prix. During his first year, he was determined to prove he was superior to humans, however in the following year he entered to satisfy his appetite for mammoth ribs.

Retrieved from "https://fantendo.fandom.com/wiki/Bio_Rex?oldid=3218569"
Community content is available under CC-BY-SA unless otherwise noted.