Start a Wiki
“Hey! Take it easy! You might become a ghost like me!”
— Bingo, in Koopalings Universe

Bingo Boo, is a Boo that has a Brooklyn accent and he likes money and games. Before he died he used to be a man named Lance A. Bingo. He is also King Boo's son.

He owns a game in the game called Bingo Boo's Mansions where you try to scare Luigi out of the mansions.

He is in a secret level in the Haunted Mansion that you can only get by getting all of the stars. But in the secret level you have to donate coins so he can build a bigger mansion. Or contribute little by little. Once you donate 5,000 the full mansion will be finished. 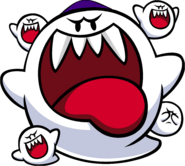 As he appears as a cartoon 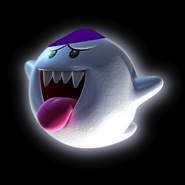 As he appears in Koopalings Universe 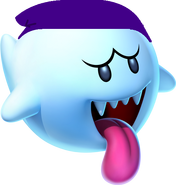 Bingo in Super Mario and Luigi 64 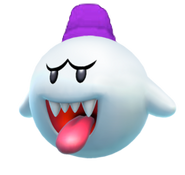 Bingo Boo as he appears in Super Mario Panic
Add a photo to this gallery
Retrieved from "https://fantendo.fandom.com/wiki/Bingo_Boo?oldid=3196968"
Community content is available under CC-BY-SA unless otherwise noted.