Bew made by Endgame Enterprises.
Do not edit without Dick's permission, <insert your name here>. If you edit this page without permission, you'll be warned on your talk page. If you want to edit it, go to his talk page and ask him if you can edit this page. However you can add categories and fix minor errors in Bew.
JUST REMEMBER THAT Bew IS OWNED BY BRANDON JAY DICK, IF YOU MESS UP EVERYTHING, I WILL WARN YOU! OKAY PEEPS? OKAY!
Without further ado, enjoy the game. Any criticism is permitted here, FYI!

Bew is the mascot of Krazy Kombat Studios and the main character of the Bew series and the Bloodbath series along with his Spike Top friend, Skar. He is the founder of the Ghostly Enterprises. His partner and brother is Bloo.

Bew is a gray Boo who has a light blue mark on his forehead and a red mask. In the Bloodbath series, Bew is much more darker and has an orange mask.

He has psychokinesis powers, meaning he can move objects at will from far.

Bew is the main character of Bew & The Chaos Tree where he is the founder of Ghostly Enterprises, a group which was formerly founded by his father, who died when Bew was 7, and chosen his son to be the leader moments before he died. Bew then needs to protect Hyndi's life support trees, the Trees of Life from being decayed by the Chaos Tree). Bew joins with his fellow Boos to save the main life supports. Along the way he battles his greatest enemies, like Champ, Kup and Blak, the creator of the Chaos Tree. Bew beats Blak in his temple and destroys the Chaos Reactor, turning the Chaos Tree back into its original state.

Bloodbath: Key to All Souls

In Key to All Souls, Bew helps out Skar to find his soul before it is corrupted by Blak and Skar's greatest rival, Speky at Chaos Temple by the Chaos Reactor, which is customized by Speky to corrupt souls. Bew recruits his Ghostly Enterprises members to look for the temple, because it was relocated after the events of Bew & The Chaos Tree. Bew and Skar beats their respective greatest enemies in the temple, but Speky disappears into his battleship for the final boss fight. Bew and Skar ultimately destroys the battleship and saves the world of blood. 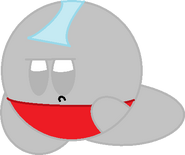 Bew as he appears in the Bew series. 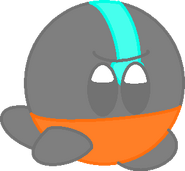 Bew as he appears in Key of All Souls.
Add a photo to this gallery
Retrieved from "https://fantendo.fandom.com/wiki/Bew?oldid=3200893"
Community content is available under CC-BY-SA unless otherwise noted.