Beorn Battle Royal is a game about the various Beorns that exist throughout the known Universes. It takes place in one of the many Dimensional Doors in the NightRift Realm. It is rated 10+ by the ESRB for Mild Fantasy Violence and Crude Humor. This game is for the Nintendo Switch mini and it is set to release before Summer this year. It will receive various events throughout the year adding new Beorns, Weapons, Item, Etc.

A mysterious unknown person sends a letter to several Beorns telling them to visit the Eiffel Tower in France. After getting there they find that this was a deliberate attempt to kill all Beorns set up by The Enemy. He sent the Fool to take care of them. But since he is weird he sucks them in a dimensional door that leads to Beorn Battle Arena in the NightRift Realm. After getting sucked in the Beorns are forced to fight each other till there are no Beorns left (Great Plan Fool -_-). Each character then has to take there own path that they go through the to get to there boss (Simmiler To Classic Mode in Smash Bros.). 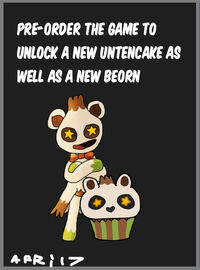 Pre-Ordering the game will allow you to unlock a new Beorn as well as a new Untencake Type. It will unlock Nebuel as a playable character

Retrieved from "https://fantendo.fandom.com/wiki/Beorn_Battle_Royal?oldid=2943236"
Community content is available under CC-BY-SA unless otherwise noted.