Fantendo - Game Ideas & More
Register
Don't have an account?
Sign In
Advertisement
in: What is the New Fantendoverse?, Fantendoverse Species, Species, Benefactors

Benefactors are a species of insectoid aliens native to the Fantendoverse. They are known for being intensely reclusive, building their empires in remote areas by exploiting the less fortunate.

The Benefactors have taken great lengths to share little about themselves, but outside records show them to be scavengers who developed space travel rapidly, due to mining their own homeworld dry. They've tried to take root across the universe by enslaving other species, but these attempts often prove futile. By modern times, the last real major civilization they maintained was held together by their subjugation of the Sirens, which allowed them to fund large space station such as the Hive. Since the destruction of this station, the remnants of the Benefactors have been spotted settling across systems, often in uneasy cooperation with their former servants.

Benefactors are lanky arthopods, rather comparable to bees in terms of appearance. They have large crested heads with mandibles and antennae, their exoskeletons having a strange rough texture to them. They have stubby clawed hands and feet that are traditionally enhanced by their clothing to be more functional, and older Benefactors often have a fuzzy "scruff" around their necks. They're most often seen in plain, utilitarian armor, but higher ranking Benefactors often wear cloaks to denote status. 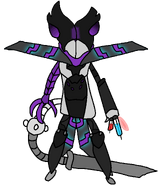