Bean the Dynamite is a tufted woodpecker who makes recurring appearances in the Sonic series. Bean likes to throw bombs at his enemies, and seems to have an endless supply of them. The character was modeled after Bin and Pin, two characters in the arcade game Dynamite Dux. He is also an unlockable character in Fighters Megamix, along with Bark, and made a cameo in Virtua Striker 2 where Bean is featured in an unlockable team.

Bean has been officially confirmed as neutral.

Bean and Bark are best friends, despite their opposites, Bean is the only one who knows Bark's crush on Nic the Weasel.

It is said that Jet is a younger sibling of Bean, But Bean has never mentioned Babylon so it is unlikely.

Next to Bark, Fang is Bean's best friend, and get along quite well in Sonic Heroes: Return of Heavy Metal.

Bean makes an appearance in Sonic Heroes 2 as part of Team Dark alongside his two old friends Bark and Fang and his girlfriend Rouge. 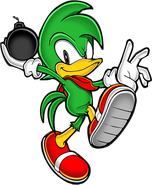 Add a photo to this gallery
Retrieved from "https://fantendo.fandom.com/wiki/Bean_the_Dynamite?oldid=3345963"
Community content is available under CC-BY-SA unless otherwise noted.