Fantendo - Game Ideas & More
Register
Don't have an account?
Sign In
Advertisement
in: Free to use Characters, Characters, What is the New Fantendoverse?,
and 4 more

Eliza Baxter, known to most by her codename Beam, is a young woman and newfound Misfit. Upon joining the organization due to her longtime friend Aero, she was rather reluctant about being a Misfit and took it as an excuse to get women, but her mind was changed by a dangerous encounter with Parasite leader Sable.

First appearing in Issue 4 of Blank Out as a secondary character, Beam, alongside Aero, is now one of the two main heroes of Aero & Beam. Reception for the character has been positive.

Beam is a pale and short Chinese woman with long, disheveled purple hair and brown eyes, who often wears dark sunglasses. She usually wears a purple tanktop with greenish yellow lightning bolts on it, as well as black sweatpants and pink and black tennis shoes. Her left arm is wrapped up in black cloth, and on missions, she wears the standard jet black Misfits suit of armor.

Eliza was born to Chinese descent, her great-grandparents moving to America in the 20th century. A rather poor family, the Baxters lived in New York City and sent their only child, Eliza, to public school where she quickly realized how unfair and rough life is.

During puberty, Eliza came upon her energy powers and held them back in order to escape bullying and discrimination. Upon meeting another person with powers, Amber Arlen, the two became fast friends. Soon after, Eliza became infatuated with Amber. When Amber decided to join the Misfits as Aero, she encouraged Eliza to do the same. Looking for a nice place to sleep and interested in popularity, she agreed.

Beam and Aero were quickly paired together as NewBirds, Beam being a slacker who constantly complained about being a Misfit and not taking the mission seriously, contrasting with the aspiring Aero. Put on a mission to take down the Parasites gang, they were kidnapped by gang leader Sable, who pit them against Blank as a test for her.

Unlike her girlfriend Aero, Beam pretty much acts the same all the time, being a slightly abrasive and snarky slacker who always has time for a joke. Before the Parasite incident, she viewed being a Misfit as a joke, but after she was changed a bit, still keeping her sense of humor and sarcasm but taking the job more seriously. When she or her friends are in danger, she loses her shit and spews expletives and insults.

Beam can, as her name indicates, fire energy beams from her hands, specifically the palms of them. The effect and size of these beams depend on her focus and the time she uses to "charge" them. A small blast will knock someone off balance and slightly sting them, while a full power blast could burn someone to death. It's all about how long she has to prepare.

Her primary weakness besides a simple lack of time is when she battles against armored opponents or those with resistance to energized attacks. 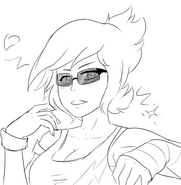 Beam, as drawn by Ziegs.

The sunglasses art, flipped by CrunchTime420.

Beam, as drawn by User:LegendaryHero1023. 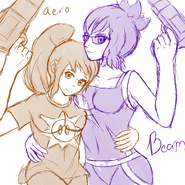 Aero and Beam, as drawn by Scyther.