Bazyli Koopa is one of Bowser's Koopalings. Due to an accident in his childhood, he lost an arm. It got replaced by a powerful rocket launcher.

Bazyli Koopa has a green shell and green head. He has blue hair that hides his right eye, and a quite long tail. One of his arm is a cannon that shoots homing rockets. He has three fangs, two on the left and one in the right. The koopa enjoys putting various devices in his cannon, like a grappling hook. He is mostly calm, through he shows hints of bullying occasionally. This is especially visible with Lemmy Koopa.

Bazyli was born and raised like a normal koopaling until the age of 6, when he fought Luigi for the first time. Luigi jumped on him and Bazyli almost felt in the lava. His right arm felt into it through. This hurt the Koopaling a lot, and he vowed to take revenge on Luigi one day. Thomas then gave him a robot arm he made. Bowser never let him fight the Mario Bros again until the age of 11. He then fought Mario, but got defeated. 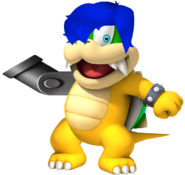 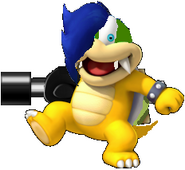