Bazukas are small, red Kremlings that appear as enemies in the Donkey Kong series. They are members of the Kremling Krew, and debut in Donkey Kong Country 3: Dixie Kong's Double Trouble as somewhat rare enemies. They wield large, metal bazookas (hence their name) with laser sights. This allows them to fire projectiles at Dixie Kong and Kiddy Kong. To attack, they will fire several different barrels, including TNT Barrels and Steel Kegs, which can be jumped on by the Kongs to avoid damage and cross large gaps. Though Bazukas themselves cannot hurt the Kongs, their bazookas protect them from any direct attacks; the only way to defeat one is to throw a TNT Barrel at it.

Bazukas appear as playable characters in Super Mario Spikers, appearing as Power-type Sidekicks. Their outfit consists of golden gauntlets around their wrists and feet, as well as a gray skin-tight outfit. Their bazookas, said to be modified to be even more dangerous, also change color depending on the team. Both the suit and bazooka showcase their team's logo. Their theme is a mashup of Mining Melancholy in Donkey Kong Country 2: Diddy's Kong Quest and Nuts & Bolts in Donkey Kong Country 3: Dixie Kong's Double Trouble.

Bazukas appear in Minion Quest: Strength in Numbers as units that can be used in squadrons. The are classified as Ranged troopers, and attack by firing cannonballs enemies. Being Ranged troopers, they are strong against Flying troopers but weak against Melee troopers. They have a high POW stat, but a low SPEED and EVASION stats. 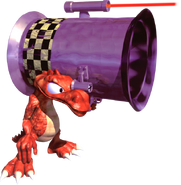 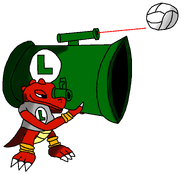 Retrieved from "https://fantendo.fandom.com/wiki/Bazuka?oldid=2893379"
Community content is available under CC-BY-SA unless otherwise noted.