Bayonetta (real name Cereza) is a playable veteran character in Super Smash Bros. Calamity. She is one of the two remaining Umbra Witches, a mysterious race who possess a spectacular talent for the Bullet Arts. She is also the bearer of the "Left Eye", that oversees the darkness.

Bayonetta, despite keeping her smash attacks, aerial attacks, grabs/pummel/throws (with the exception of her down throw) and up special, has a new moveset, mostly in her special moves.

Bayonetta has a new taunt, in which she turns into her Bat Within form before turning back. This can be used to escape attacks.

Bayonetta no longer needs to end a ground attack to perform her alternate idle pose.

Bayonetta is slightly less vocal in her victory poses, saying just one thing in her first and second victory poses.

Bayonetta has a new victory pose which is based on her animations for her Witch Time Final Smash and her Wicked Weaves side smash.

Bayonetta can use Odette, a pair of ice skates, to strengthen her kick attacks, and also making them have a 25% chance of freezing her opponents if the kick move connects, and Shuraba, a demonic katana to increase the range and knockback of her punch attacks.

Bayonetta has a new and faster jab, two kicks forward following up with an upwards kick, which is based on her old forward tilt.

Forward tilt is now her former dash attack, a dashing punch with her guns extended.

Down smash has a weaker meteor smash.

Side special is now just After Burner Kick.

Down special is Bat Within.

Bayonetta can wall jump and wall cling. Despite being able to wall cling, she cannot wall climb.

It is possible to cancel Bayonetta's taunts (with the exception of her standard taunt) halfway through their lengths using any action. 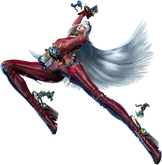 Add a photo to this gallery
Bayonetta has two alternate costumes, one based on her initial appearance in the first Bayonetta game and one based on Jeanne, her best friend and rival (which also replaces her Jeanne alternate color swap from Super Smash Bros. for Nintendo 3DS / Wii U). Despite playing similar to Bayonetta, she has a different voice and animations, aesthetically alters her Wicked Weaves smash attacks to match her white hair, and the crowd and audience acknowledge her as a separate character.

Retrieved from "https://fantendo.fandom.com/wiki/Bayonetta_(Calamity)?oldid=2577094"
Community content is available under CC-BY-SA unless otherwise noted.