Battle of Bracelets: The Origin of the Legend (also name-coded as BoB Bis or BoB 1Bis) is the new title of the franchise Battle of Bracelets. It is the result of the remake of Galactian: Battle of Bracelets but with features of the newest games and changes in the whole story. This game has been released on 2014. According to the last information of Project Eternity, this game would be created for Fusion Eternity, a new console in development and Element Alpha.

The main story talks about Aingeru, a young boy who gets the Green Golden Bracelet. Then, Aingeru will find other Golden Bracelets who will fight the darkness and avoid the awakening of Darkreon, God of the Shadows. Through his journey, he will find other armies of enemies and gods who are looking for a greater power. Besides, this story is the beginning of a huge battle in which humans and gods will fight each others to fight for their dreams.

Besides, the story shows another army as a secondary enemy, Pluto the God of the End, who first appeared as an angel of Zeus but his power was locked by him to avoid the end of the Earth. But the Plutonians will join him to bring the world to the end. Also, the game shows new characters as the Royal Families that can be found during the story. Who will need the player's help for different reasons. There are some other surprises in the game that can be seen during the story.

To read the whole story, visit the page of the here.

The game contains several modes that any kind of player can enjoy. Depending on the use of each mode, the player will have more or less characters, items, stages and weapons to choose on other modes. Some of the modes are not available at the beginning of the game, they have to be obtained by the Story Mode, by reaching some achievements or downloading extra content. Here, the list of modes that appear in the game can be seen:

The game will have 72 playable characters. Most of them are from the story mode but other can be got by the Mission Mode.

* These characters have secondary appearances and outfits.
(N) The character has never appeared before on the series.

Any of the custom soldiers can be changed by Dark/Death/Celestial Witches, Wizards or Knights.

(R) means the beast or battle animal can be ridden.

To remember the different kinds of weapons that there were in the latest games of the series, some of the weapons are back. There are still swords, hammers, spears, edges, arrows and bows, arms, legs, etc. There are also a special kind of weapons, technological weapons that contain the essence of the most destructive effects of nature. The most destructive of these weapons are the Technoswords, the ones that the Dark Commanders bring. Here, you can find any of the new weapons that can be found in the game.

Abilities are fighting tools that can be used once in a battle, can be lost by using them and have an immediate effect over the battle. Abilities can be obtained in the Story Mode or Patrol Mode by buying it or finding it anywhere, or as prize in the Tournament or Eternal Fight. Abilities are bought in Ability Shops, zones where the user can buy abilities, recharge or sell them.

Some abilities are unique for certain characters. For example, Aingeru has the Negative Zone as ability but can be lost if he uses it. To recharge it, the user will have to go to an Ability Shop and choose the option "Recharge Abilities".

To find the abilities that can be found in the game, you can take a look here.

Some characters show two or more different forms in the game. Some can be got in the game, other ones can be got through DLC content and others will appear in future events.

It is an alternative dimension in which things do not work a normal way. It is accessible through portals and it is important in the Story Mode. It is thought that even particles are not the same in the real world than in this dimension. It is why physics in this world are completely different.

Missions are independent pieces of story that can be played from the Story Mode, the Patrol Mode or the Mission Mode. In the first two modes, the player can achieve the mission by finding it (or find the NPC who begins this mission) through the map. In the third mode, the player will have a mission library in which they can decide which mission to play, besides, the reward is displayed on the menu of the mission. These missions are useful to obtain special items, capture special beasts or unlock other characters, such as Thanatos or Hypnos who do not appear in the story and cannot be obtained there.

To see the list of missions you can visit this page. You can find the Story/Patrol and the pure missions in different paragraphs.

There are some amiibo figurines that are used in the game. The function of the amiibo toys is allowing the player choose special characters that do not appear in the game without amiibo. These characters have special attributes that normal users cannot have. Besides, the amiibo figurine has a special function that keeps the level of the character in a bar-code, so that the character can be used with their own properties in different games. Besides, the game allows special cards that activate special abilities of each character. It has been announced that each character will have 30 cards that can be bought in a 6-cards pack at the price of €0.30/$0.30. The price of each amiibo character is €4.95/$4.95.

Here you can see the list of amiibo toys that can be found and their skills:

By using the amiibo toys from Super Smash Bros., the player will get skins for the characters of Battle of Bracelets based off Nintendo characters. You can see here the list of Nintendo skins that can be unlocked with amiibo:

Battle of Bracelets Store is a downloadable service of Element Alpha and Fusion Eternity and it costs €0.49 / $0.50. In this app, the player can buy downloadable content for the game. The most important articles that can be found in the store; they are the Expansion Packs of Battle of Bracelets: The Origin of the Legend. At this moment, two have been announced. They are BoB Bis: Aquarian Invasion, BoB Bis: Ikarus Invasion and BoB Bis: Twilight World.

Tromia
Add a photo to this gallery

Hades, with his appearance from The Cursed Death.

Pandora with her appearance from The Cursed Death.
Add a photo to this gallery 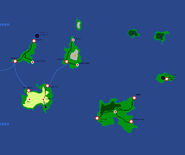 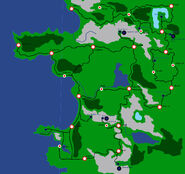 Galactian Land
Add a photo to this gallery

Aingeru fighting Shadow Aingeru
Add a photo to this gallery

What do you think about the game overall?

Should the game often get free new characters?

You can suggest and vote different characters, use the official thread to make suggestions:

Start a Discussion Discussions about Battle of Bracelets: The Origin of the Legend