Start a Wiki
“I'm waiting for you all...”
— Hades in the beginning of the game.

Changes with Battle of Bracelets: The Cursed Death

The game will contain several modes that the player will be able to enjoy. This game is multi-genre, mostly RPG-fighting although there are some modes that will let the player enjoy chess and tactical RPG. Some modes need to be unlocked in the Story Modes. In each mode, the player can get new characters, items, stages, weapons and even other modes. Here, you can see the list of modes that can be played in this game:

The story of the game is similar to the one of Battle of Bracelets: The Cursed Death, although there are several changes in the character roster and the story. Besides, there are some additional parts of the story that could not be found in the original game. The main story is the continuation of the story that was told on Battle of Bracelets: The Origin of the Legend. The Golden Bracelets travel to the Hades to save Bella, and the Death Bracelets to bring back the Darkness Dýnamis that Pandora, one of the servers of Hades, stole Darkreon after fighting the God of Light.

This mode follows the story about the group led by Aingeru and Drake, who have different objectives but they will try to help each other. However, the attack of the Golden and Dark Bracelets was expected by the Infernal Army. Meanwhile, the God of the Underworld is preparing his return to the Surface. This journey will be an inflection point for the heroes, who will have to learn a lot if they want to come back home, save Bella and avoid the awakening of the God of the Underworld.

To read about the story of this mode, you can read it here.

The arrival of the outsiders will make the Infernal Army become more dictatorial and dangerous for the people who are imprisoned in the Hades. The prisoners and the ones who were given a life in hell have been repressed. A prophecy explained that a hero would free them and would bring them to the Surface. The player, as Arian, a human with powers that only Bracelets or Gods have, will have to lead the repressed people and drive them to freedom. However, they must learn that their powers are not a divine gift.

To read about the story of this mode, you can read it here.

This mode can be unlocked once Kephyros is available in the character roster.

The player will start on the Hades' Castle. The Hades' army will control the Hades' Castle and the three last temples and the invaders will control the Oracle of the North and the three first temples. The fourth temple will be fought by both armies. Once an enemy temple is invaded, the player can continue fighting for the next temple; but if an ally temple is invaded, the player will have to come back to the previous temple. The only way to get back a temple is to beat enough enemies to be in majority. Hades will help by throwing a giant wave of energy that will heal the allies and will weaken the enemies. The number of enemies will vary depending on the difficulty.

* All these characters have, at least, a secondary skin. These skins will be shown in the section of Secrets of this page.

Super Smash Bros. amiibo will be used also on this game. Right now, only some figurines have been announced to have a role. When they are used on this game, the player can unlock these characters. The available characters are:

Battle of Bracelets Store is a downloadable service of Element Alpha and Fusion Eternity and it costs €0.49 / $0.50. In this app, the player can buy downloadable content for the game. The most important articles that can be found in the store.

Besides the new downloadable content that can be shown in this section. All the content at this section can be bought too for this game.

Egion and his familiar (basic painting) 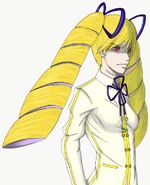 Zharia
Add a photo to this gallery

If you have some advice to improve the game, please let me know with a comment below. Thank you!

Retrieved from "https://fantendo.fandom.com/wiki/Battle_of_Bracelets:_Beyond?oldid=3130869"
Community content is available under CC-BY-SA unless otherwise noted.