Battle Skull is a character and the third highest-ranking member of the New Koopa Troop, only being beaten by Korey and Neo Koopa. He looks like a Shy Bones, but his cloak is orange instead of red and his face is much more menacing then that of an ordinary Shy Bones.

Battle Skull is a serious, disciplined warrior who takes his job very seriously. He is very loyal to Lemmykoopa24 and will do whatever he can to defend him. He rarely shows any signs of emotion. He has a deep hatred for Trap Master.

Battle Skull, despite being a Shy Bones, does nothing a Shy Bones does. Instead, he has an entire plethora of deadly weapons that he can carry anywhere. He has every weapon imaginable and can wield them all with supreme expertise. He can handle any weapon almost perfectly and is also immortal. He can never die. 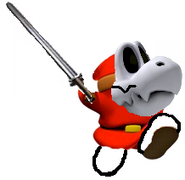 Another Battle Skull artwork.
Add a photo to this gallery
Retrieved from "https://fantendo.fandom.com/wiki/Battle_Skull?oldid=2029677"
Community content is available under CC-BY-SA unless otherwise noted.