Bastiodon (Japanese: (Japanese: トリデプス Torideps) is a dual-type Rock/Steel Fossil Pokémon. It evolves from Shieldon starting at level 30, after it is revived from an Armor Fossil.

Bastiodon appears to be a cross between a Zuniceratops and a bulldozer. Its dark gray, square head resembles a castle wall, complete with four cream yellow, window-like spots with a black outline, three dark gray spikes on the top, and two larger gray spikes in the upper corners. Bastiodon's triangular nose extends from the middle of its shield-like head down over its lips and appears to be pierced by a gray, horizontal spike. Four spikes jut downward and four large, blunt tusks protrude upward from its dark gray lower jaw. Bastiodon's cream yellow eyes are partially obscured by the nasal spike and spaced-out tusks. Its thick, cream yellow body is further protected by a gray ridge and dark gray plates on its back, jagged growths on its legs, and a plated tail. Despite its rough, intimidating appearance, Bastiodon is surprisingly docile, caring, and feeds on grass and Berries. If a herd of Bastiodon is attacked, the adults will line up in a wall around their young. Their rock-hard heads can repulse any attack. 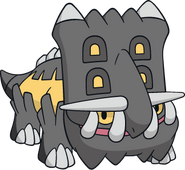