Bass, also known as Forte in Japan, is a Robot Master who debuted in Mega Man 7. He was created by Dr. Wily to imitate Mega Man's design, along with his robotic wolf companion Treble, an imitation of Rush's design. He was created based on a research conducted on Mega Man with the intention of surpassing his power. Before this, he unintentionally created a powerful energy source to which he called Bassnium, which powers Bass. Bass is the prominent anti-hero of the classic Mega Man series, with his end goal being to become the most powerful robot in existence, and is Mega Man's primary rival.

Later on, Bass would be surpassed and succeeded by Zero, an advanced creation of Dr. Wily whom he alluded to Bass in Mega Man: The Power Battle and showed schematic blueprints of in Mega Man 2: The Power Fighters, saying that he would blow away both him and Mega Man with a power level far superior to that of the two.

Bass's design was made in mind to be a polar opposite of Mega Man's; Bass is adorned in black armor with gold lining. On his chest there is a triangular bluish purple crystal (with some artworks showing an "F" for "forte" engraved inside its center). He has purple stripes running down from his eyes and extending down his cheeks. He has distinct red eyes (usually with pink retinas). His helmet features large fins that resemble a cobra, giving him a slightly taller appearance than that of his rivals, and a cross-shaped blue jewel on the forehead.

Bass is presented as an extremely smug, bad-tempered, egotistical, rebellious, fiercely independent and arrogant individual who believes that he's the strongest above all else. Bass is very prideful and thinks quite highly of himself, labeling everyone else around him as inferior "junk robots". He has always been shown to hold a rivalry with Mega Man, but aside from him, Bass happens to have hatred for every robot that was created by Dr. Wily, since he feels that they're standing in the way of his goal to destroy Mega Man and become the strongest. Bass looks down on them, believing himself to be superior to them in every way, shape, and form.

However, a notable aspect of his personality he showed in Mega Man & Bass was that he seemed to have some degree of respect for humans, since they created robots. Duo says that there is goodness in Bass (even going so far as to say that he has "justice energy"), which the latter ignored, saying that he only wants to fight, claiming that his only concern is who the strongest happens to be. Despite his rivalry with Mega Man, he is willing to work alongside him if it is to his benefits, as evidenced by Mega Man 2: The Power Fighters and his aiding Mega Man in defeating Rockman Shadow's forces in Rockman & Forte: Mirai Kara no Chousensha. The latter instance also implied that the aftermath of the battle left Bass with some respect for Mega Man. During the events of Mega Man & Bass, he even began to show some form of concern for King when he was (seemingly) going to die in his own castle's explosion.

A powerful energy source known as Bassnium powers Bass, which allows him to generate green/purple energy which allows him to suspend himself in the air. This is shown once he transforms into Super Bass in Mega Man 7, in Mega Man & Bass once he spawns in a stage, and in Mega Man 2: The Power Fighters. Along with that, Bass can use his arm cannon known as the Bass Buster, to shoot pellets out of it (in Mega Man 7, he could perform Charge Shots with it, though in Mega Man & Bass, he can only shoot normal shots, though he can aim these in multiple directions). Seen in Mega Man 7, he can fuse with Treble to transform into Super Bass during his second fight with Mega Man in Wily Fortress Stage 2, with similar abilities to the Super Adapter that Mega Man uses, though he can fire a regular Charge Shot and a rocket fist unlike Super Mega Man. Bass can also perform a rising kick attack and an air dash attack as seen in Mega Man 7's hidden-two player battle mode.

In Mega Man 8, due to one of the Evil Energy capsules he used, Bass gained many new abilities; such as the ability to fly as long as he wants, as well as being able to fire powerful laser beams. He also gained a new Adapter transformation with Treble called "Treble Boost".

In Mega Man and Bass, Bass was given the ability to dash (just like how Mega Man X does in the Mega Man X games) and double jump, making him more versatile than Mega Man. As stated before as well, he can quickly fire pellets that can be aimed in multiple directions and remove the shields of enemies like Sniper Joes (seen in Mega Man 10), though unless he is jumping, he cannot move while firing and his pellets do not travel through walls through normal means. He loses his double jump ability in his playable appearance in Mega Man 10.

Bass appears in Super Smash Bros. Calamity as an Assist Trophy character, who attacks by firing from his Bass Buster, dashing across the stage. He can also perform an upwards kick and somersault.

Bass appears in Mega Man 12 after being absent from Mega Man 11 as a midway boss that appears in the next stage Mega Man visits after defeating three Robot Masters, and as the end boss of Wily Stronghold 3. He is also a downloadable playable character, controlling like he does in Mega Man & Bass. Story-wise, he steals a pair of the Double Gear System Dr. Wily was making (in Mega Man's story, it is not directly revealed that Bass stole them), hoping this will help him to destroy Mega Man. He eventually encounters Mega Man at one point to challenge him, though he loses and retreats. He later encounters Mega Man in Wily Stronghold 3, facing him off once again, using the Treble Boost, paired up with the Double Gear System. Despite this, he still loses, and after the battle, he and Treble are left severely overheated due to both the transformation and Double Gear System.

In his campaign, he constantly faces off against Nega Man, the evil counterpart of Mega Man that he thinks was created by Dr. Wily. He does encounter Mega Man at some point, and beats him. Before he can finish him off, Rush saves Mega Man at the last second. Bass then continues on his journey, eventually travelling through the oceans surrounding Wily Stronghold to reach the fortress. Bass does encounter Nega Man one final time, before the fight is interrupted by the Yellow Devil Mk-IV. Once again, he meets up with Mega Man in Wily Stronghold 3, and beats him once again, though the blue bomber is saved by Proto Man, causing Bass to retreat to another part of Dr. Wily's fortress. In there, Dr. Wily talks to Bass through a monitor, telling him about the "girlie-looking" robot he showed to him previously. This robot turns out to be Zero, an advanced creation of Dr. Wily. He releases the robot from his capsule (despite being unfinished) and he begins to battle Bass. Bass's attacks prove no match to Zero, who beats him to a pulp. Before Zero could finish Bass off, however, he ceases to function and Treble saves him, taking him to a cliffside. After questioning how he could beat Mega Man but not Zero, Bass rushes off the scene.

“Damn! I was careless! I feel stupid to have been beaten so easily... Maybe I should give up and leave Wily to you!”
— Bass to Mega Man, Mega Man 7

“Now you know that I am the strongest. There's no need for you to make any more junk robots.”
— Bass to Dr. Wily, Mega Man: The Power Battle

“You're too late, Mega Man. He who hesitates is lost! We shall return!”
— Bass to Mega Man after saving Dr. Wily, Mega Man 7

“You're so naive! That will be your downfall! I'm not the same weakling anymore! I've got new powers!”
— Bass to Mega Man, Mega Man 8

“What I've fought for? That is ridiculous. I don't need a reason to fight. I have and am going to fight only to destroy Mega Man!!”
— Bass, Mega Man & Bass

“Wily, you idiot, you never learn from your mistakes.”
— Bass, Mega Man 2: The Power Fighters

“Ha! This girlie-looking, long-haired robot will be the strongest? Don't make me laugh!”
— Bass after seeing Zero, Mega Man 2: The Power Fighters

“It was just a race. I don't feel I truly defeated him. I must defeat him in a real fight before I can claim victory.”
— Bass, Mega Man: Battle & Chase 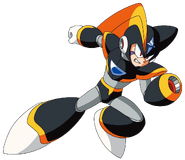 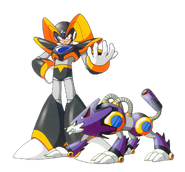 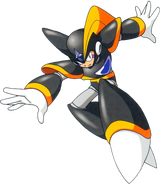 Retrieved from "https://fantendo.fandom.com/wiki/Bass?oldid=3038936"
Community content is available under CC-BY-SA unless otherwise noted.