Bart is Biff's evil twin brother. He appears in the game Boss Battles as the commentator and face of the EVIL league.

Bart resembles a short, yellow, humanoid creature with an oblong head, much like his brother. He wears a black, rhombus-shaped mask. Atop his head is a left fist-shaped appendage that is capable of the same actions as any other hand would. Like most fighters in the ARMS league, Bart's blue pupils have a spiral pattern, and as such also has the extendable ARMS ability. He also wears a eyepatch over his left eye.

Bart appears as the commentator and face of the EVIL league of the game, appearing when the player takes on Bosses. 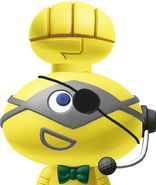 Bart as he appears in Boss Battles.