Barrels are items mainly appearing in the Donkey Kong series, also appearing infrequently in Mario games. They serve many purposes, and Donkey Kong often uses them as ammo and as cannons.

Barrels often differ in purpose from game to game. In the original Donkey Kong, Donkey Kong throws barrels that roll across the stage and down the ladders, which Jumpman needs to jump over or smash with a Hammer. Donkey Kong Country would later introduce the idea of Regular Barrels, which Donkey Kong or any of the other playable Kongs can pick up and throw at enemies or obstacles to destroy them. A variant of the barrel that was held together with vines instead of steel hoops known as the Vine Barrel appeared only in the original Donkey Kong game, and are a weaker variant of the Regular Barrel. The Vine Barrel shatters on impact with an enemy or obstacle as opposed to continuing to propel forward.

Barrels are Donkey Kong's special item in Mario Kart: Turbo Circuit. They are used by being tossed ahead or behind, crushing any karter in its way, breaking when hitting a wall.

A Barrel appears as a carrier item in Super Smash Bros. for the arcade. It can contain at least one item but has a 12.5% chance of exploding. It rolls until it hits a fighter or a wall. It can also slow down and roll in the opposite direction if on sloped terrain.

A Barrel from Donkey Kong Country 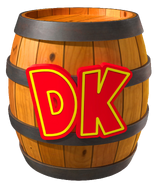 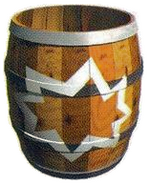