Baron Brrr is a recurring boss in the Mario series, first appearing in Super Mario Galaxy. He is a giant Li'l Brr with a golden crown on his head, which he is able to fire iceballs from. He may be a leader of sorts to the Li'l Brrs and Li'l Cinders. His body also has finely-cut spikes protruding from it.

Baron Brrr first appears in Super Mario Galaxy. He is a boss encountered in Freezeflame Galaxy, during the mission "The Frozen Peak of Baron Brrr". When Mario reaches his arena on the mountainside, the battle begins.

Baron Brrr will launch iceballs from his crown at Mario, which will freeze and damage him. He can avoid the iceballs by standing behind walls around the arena. Baron Brrr resides on a platform above frozen water, which will damage Mario if he swims in it. To reach him, he must use an Ice Flower to become Ice Mario, allowing him to walk across the water and face Baron Brrr. When he reaches him, he may use a shockwave attack that doesn't damage Mario but blows him back to the start of the arena, though this can be dodged. To damage him, like a Li'l Brr or Li'l Cinder, Mario must use a Star Spin close to him, putting him in a small, black, dormant state. He will bounce away from Mario in this form, though using another Star Spin to hit him will damage him. After being hit twice, Baron Brrr summons two Li'l Brrs to fight alongside him. After being hit three times, he will be defeated, and Mario can get the Power Star.

Baron Brrr appears in Jake's Super Smash Bros. as an enemy that can be encountered in Smash Run. He is considered a Dangerous Enemy, and rarely spawns, but is marked on the map when he does. Unlike regular enemies, he has a health bar indicating his health, and rewards a lot of power-ups when defeated. Baron Brrr has several attacks, including his ability to fire iceballs from his crown in Super Mario Galaxy. He can also cover himself in blue flames and chase the player, freezing them on contact. While covered in flames, he may also slam on the ground to send icy pulses that can also freeze. 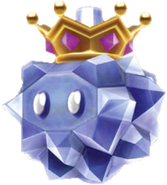