Fantendo - Game Ideas & More
Register
Don't have an account?
Sign In
Advertisement
in: Characters, What is the New Fantendoverse?, Females,
and 12 more

Bang Crimson (real name Deka Pepple) is a motorcycle racer and member of the Multiverse Fighters Association. She first appears in Crow vs the World. She is a thrill-seeker of sorts and has a thing against settling down anywhere. She was created by Exotoro (t∣b∣c) as a character that could pop in various different situations. She became notably close to Rachel Harel and even started dating her seriously during the events of Days of Victory.

Bang Crimson is a fighter who uses the power of Red Energy to fight, utilizing her Dynamo Knuckles to channel the energy as opposed to being able to use it as a fullblown power. She also participates in races on her motorcycle. Her attitude is to live fast and die young. In spite of her free-wheeling life style and flirtatious attitude that never goes fully serious, she also has fears of never finding someone to fully commit to because of her free spirit lifestyle.

Bang Crimson has red hair that is spiked upwards. She wears a pair of blue shades. She has a white shirt and red tie and her jacket has the Dynamo Knuckles, which allow her to control something called "Red Energy", a hot plasma-like substance that drains blood and turns it into fuel for her burning attacks. She has black pants and red shoes.

Bang Crimson is fairly energetic, often doing life-risking stunts daily. She seems to have an insane amount of luck considering she hasn't died yet. She is also fairly competitive and sees everything as an excuse to prove herself. She respects those who beat her. She flirts with her fellow female fighters/racers, yet hardly gets into serious territory. She is illiterate.

Despite Bang Crimson's reputation of being a flirt, she does seem to want someone to commit to, as she wanted to become serious with Rachel Harel, which they agreed upon doing in Days of Victory. She has a free living spirit and travels a lot to get from race or fight. She makes most of her living doing what she is most passionate about and doesn't like being tied down to one place or thing at a time.

Her free spirit attitude comes into conflict later on with NULL, an girl that Rachel Harel essentially adopts after the events of Rendered NULL. She seems opposed to the idea of being a parent and settling down in general. Bang is generally a friendly character has connections from all over that she can call up. She seems willing to forgive very quickly, not letting too much bother her, but can be pushed to a point.

Born as a unwanted child, she was put up for adoption and was raised by a gay male couple who taught her how to fight (to fend off invaders who would attempt to raid their house) and how to ride a motorcycle (so she could do errands quickly). Years later, she became an amazing street fighter and motorcyclist.

As revealed in World Tournament, she did not grow up alone. She has a sister by the name of Dynamo Azure and a brother by the name of Boom Ruby. Dynamo Azure and Boom Ruby are also fighters like her, albeit not as popular or well known. Dyamo Azure uses Blue Energy while her brother uses Red Energy like herself. Dyanmo Azure also makes the devices to channel the energy, hence the original name of these devices being known as the Dynamo Knuckles.

Bang powers her street fighting skills with the Dynamo Knuckles. Her Dynamo Knickles can convert liquid like blood or oil into "Red Energy", a hot plasma-like substance that burns like the dickens, however doesn't burn skin or objects, just the sensation of being burnt. The Dynamo Knuckles do not like ice and can take up to five minutes to work again if encased in ice.

Bang Crimson also owns Red Energy powered motorcycles that can generate paths over air and water out of Red Energy. These were first seen in The Coffin Year. She likely also uses these in races where permitted.

In World Tournament she is seen with a new variant of the Dynamo Knuckles known as the Crimson Rings. These allow for specific outputs of Red Energy and can be used to produce Red Energy in bursts and projectiles. It was attached to red gloves that can pull from any energy source that Bang touches. These gloves can also bond with Bang's body to tighter level, allowing her to use them as if she was pulling Red Energy naturally with ease.

Crow vs the World

Appears as a boss in the game, with the motive being to finally contain Crow and possibly extension her sister Houbara, who stole a month's supply of food from her in the past. Her stage is a mall located next to a volcano and is fought in the middle of the volcano.

Bang Crimson was revealed for Fantendo Smash Bros. Victory as a playable character on April 27, 2017. She has a new outfit for her appearance in Victory, which carries onto later appearances.

In Days of Victory she has a short appearance where Rachel reaches out for her to help against The Threat, where the two agree to get into a relationship in exchange for her help.

Flirts with her fairly often, however neither didn't really expect to get together. Sometimes Rachel flirts back, but aside from one kiss there didn't seem to be much chemistry between the two. Bang would later propose that Rachel and her start seriously dating during Days of Victory in exchange for her help against the fight against The Threat. Things went okay, but the relationship was kept a secret until Truth or Train where Rachel revealed it to everyone, much to the delight of Bang.

The two briefly dated for two months but broke up as both didn't think it was going to work. Izuka seems more anxious about getting close to anyone she flirts with probably because of this.

The two know each other through Bang's brief time with Izuka. Both have major crushes on Rachel, albeit they don't seem to really know about the other's crush on Rachel.

Doesn't bother to flirt with her but they're close friends.

Bang Crimson as she appears in Fantendo Sports Resort (DLC)

Bang Crimson as she appears in Fantendo Smash Bros. Victory 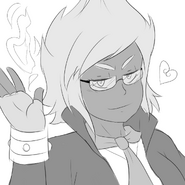