Bandits are common enemies in the Super Mario series. They are generic and seem to be similar to Shy Guys wearing masks that are never taken off, they are thieves by trade and when in battle they often steal your items (as they are most common in the RPG games). Bandits started appearing in the Yoshi Series.

Bandits are humanoid, Shy Guy-like creatures dressing in hooded robes that have a white lining around their arms and bottom of their hood. They have large, white circular masks covering their faces revealing only small beady eyes and thin lipless mouths. They are somewhat taller and more thin than regular Shy Guys and have a unique mask. Generally, common bandits wear blue robes but others wear red robes to set themselves apart.

Bandits are common enemies in the Sacred Desert in Crayon Mario. They sometimes fight alongside Pokeys or Totimis or others of their kind. They zoom to Mario to steal his items or coins, hurting him in the process. If Mario fails to defend himself, the Bandit steals certain amounts of coins or items from Mario and flees from the battle as soon as possible. Mario is able to recollect his coins or items by defeating them quickly.

Crayon Mario 2: The Legend of the Time Flower

Bandits commonly appear in the Thief Kingdom in Crayon Mario 2: The Legend of the Time Flower. In Mario's first walk in the town, a Bandit zooms near Mario in the same fashion in Paper Mario: The Thousand-Year Door (stealing half of his coins), except Mario is now able to track the Bandit near the supermarket to retrieve his coins. Several other Bandits live in Thief Kingdom, namely Robert and Randall.

A team of Bandits known as the "Grim Burglars", consisting of two Coin Bandits and two blue Bandits, are fighters in the Super Arena. One of the Coin Bandits, Ryan, have the ability to see the future about the Super Arena, for which he is eventually caught by Kazoomba, leading to the Grim Burglars team disappearing from the roster along with the Turtle Power team. They are replaced by the Night Wings and the Bombers for the rest of Chapter 2.

Bandits also appear in the 100 Floor Dungeon in the Thief Kingdom Sewers, along with Big Bandits. They do not move as quickly as those in the previous game.

In Mini Battles, Mario has to face off against Snatch the Bandit to win coins. If the player uses a secret minigame code at the title screen, the second player can use the second controller to play as Snatch, making him a playable character.

A Bandit appears as a playable character in Super Mario NHL.

Bandits filled their large role in Paper Mario: The Jewel of Heart and Paper Mario: The Jewel of Soul. A blue Bandit named Robbie joined Mario on Chapter 2 on the quest to save the world. Blue Bandits are also commonly seen in Island Port City. In Mario and Luigi's first walk in the city, a blue Bandit named Axel, with his cheeks bulged up, zooms near them, and making them dizzy. Mario, along with Goomben, is able to follow Axel near the trash can and reveals that he is seasick. Other Bandits live in Island Port City, with the most notable kind is Andy. There was a Chapter 2 boss, who was a Badge Bandit named Filchet. He kidnaps the second Pixie, Sparkles, and uses her, the Yoshis and the ocarina to transform into two, special forms known as Hotshot and Coldshot. There are also Bandits in Chapter 1, where they are infected with random Viruses along with Koopas and Shy Guys. Axel, who is the same Bandit that vomited in the introduction chapter, is revealed to be affected with a nervous breakdown disease called a "Bezerker", probably caused by a Green Virus (BatterBrain).

These masked men run around to steal your things- if they get you, you'll lose your power-up, or maybe some coins!

It's a Bandit! They run around carrying 1-Ups, 3-Ups or 10-Ups, but if they see you, they'll run! Killing one will get you a Bandit Mask.

A blue Bandit appears in Super Mario: Tournament Fighters as a playable character.

Bandits reappear in Yoshi's New Island 2 in the same fashion from the three previous games. For the first time, along with the Shy Guys, their faces change expressions (despite the fact that this feature also appeared one time in both the Paper Mario and the Crayon Mario series). The Bandit's facial expressions depends on what the player interacts with. For example, when a Yoshi or a Birdo jumps onto a Bandit, he made an "oof!" expression before he gets up. The Bandit's expressions were also used in Mini Battles, where Yoshi/Birdo faces off with a Bandit to win items or lives. There is a World 2 boss named Snatch Bandit, who was mutated thanks to Kamek's magic mallet.

A blue Bandit appeared in WarioWare: Overdrive! as the one of the playable characters. Unlike other Bandits in 3D Mario games, his design resembles a chibified combination of Super Mario World 2: Yoshi's Island, Mario & Luigi: Dream Team and mostly Paper Mario.

Bandits occasionally appear in Yoshi's Island: Baby Luigi Time!. They have the same moves as the ones from Yoshi's Island. A light green also appears whenever a boss fight starts. Kamek tries to enlarge him, but instead enlarges something else.

"Stealing" the show of chapter 2

Bandits appear in Super Paper Luigi,acting the way they do in Thousand year door in chapter 2, along with 2 new varriations,Shell Bandit and Jet Pack Bandit along with the Bandit trio,Swipper,Bandilla and Bandy Twan as bosses of the chapter.

Bandits appear in the Paper Mario anime series. A blue Bandit named Buster was the one of Mario's main partners.

They also appear in the 1996 anime series Super Mario World 2: Yoshi's Island, where they played major roles. One example is the Bandit who played Mini-Battles (referred in the anime as "Bandit Games"), voiced by Kazuko Sugiyama, who was notable for voicing Bomberman.

Bandits also make a lot of appearances in Yoshi's Island & Pokémon: Diancie and the Time's Awakening.

A green Bandit appears as a playable character in Mario: Dance Floor Paranoia for the Nintendo Wii U. This is the first time that Bandits have been known to be able to breakdance. He is one of the characters who does not need to be unlocked. The Bandit's victory theme is taken from Paper Mario: The Thousand-Year Door.

In the Campaign mode, Bandits are a common species and many of them are found near Shroom City's hottest breakdancing spots. A Bandit is also the first opponent Mario faces in a breakdancing match. In this game, all Bandits wear green clothing.

A red Bandit in Paper Mario.

A Bandit from Paper Mario: The Thousand Year Door.

A Red Bandit from Paper Mario: The Thousand Year Door.

A Bandit in Mario Party 8. 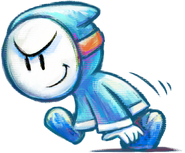 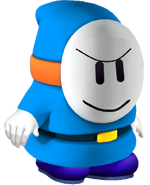 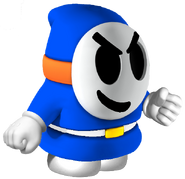 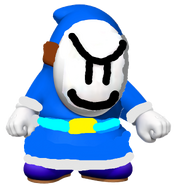 A Bandit from Mario 3D World. 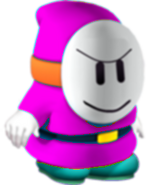 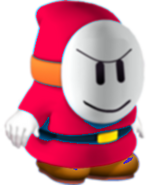 A Bandit grinning while trying to steal something. Edited by FanOfYoshi (t∣b∣c) 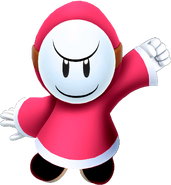 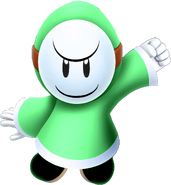 a green bandit
Community content is available under CC-BY-SA unless otherwise noted.
Advertisement