Bandineros are a kind of enemy appearing in the Wario series. They are pirate-themed enemies with only two feet and a face, complete with two yellow eyes, a hooky mouth and a bandanna mask. Like Goombas, Bandineros are very weak waddling heads.

There are several kinds of Bandineros, while those are not sub-species at all. The most basic one is red. They do not have any kind of special threat. Yellow ones, however, can jump, making it harder to defeat. Blue ones could inflate themselves, so they can float. These could also execute electricity when floating. But they'll lose their ability when stomped on. Blue ones let the character blow away from his own place. But it also needs pauses. White Bandineros are very sleepy, and holds a gigantic Garlic, unlike any other kind. If they're awake, they still do nothing. Black ones will bite the character if close.

Bandinero appears as a starting racer in Mario Kart: V² Circuit. They are a lightweight with a small size. They have an average speed, average acceleration, slightly above average turning and excellent traction. 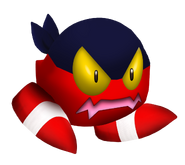