Balloon Fighters made his first appearance in the NES game Balloon Fight. The sequel to Balloon Fight, Balloon Kid was released for the Gameboy in 1990 and followed a girl name Alice who was trying to save her brother Jim when a gust of wind carried him and his balloons away.

A Balloon Fight crossover with Zelda titled Tingle's Balloon Fight DS was made for the DS and released exclusively in Japan in 2007. However, Balloon Fighter was replaced by Tingle in this game.

He is the owner of Wii Fit Board from Nintendo RPG

Since then, Balloon Fighter hasn't made many appearances, the only 3D game appearance he has made was a cameo role as a trophy in the GameCube game Super Smash Bros. Melee.

The goal in Balloon Fight is to break your enemy's two balloons, depriving him of his flotation devices. If you lose one balloon, your buoyancy drops and it becomes harder to rise. As you can pop both friends' and enemies' balloons, you have to stay alert in this two-player fun fest. The balloonist's name is unknown.

In Balloon Fight X, the Balloon Fighter goes on a jounrey to stop the G.A.P. Wizard who terrorizes Balloonberg by creating large holes in the ground and summoning monsters. 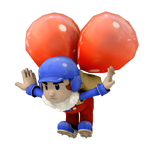 3D artwork of the Balloon Fighter 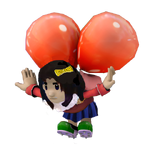 The sticker of the Balloon Fighter in Super Smash Bros. Brawl

Balloon Fighter as he appears in WarioWare Smooth Moves