Balloon Fight: Aerial Ace (バルーンファイト：空のエース！Balloon Fight: Ace of the Skies! in Japan) is the second direct installment in the Balloon Fight series, developed by Amuza and Nintendo. It was released on the Nintendo 3DS and the Wii U eShop on July 16, 2014 worldwide.

It is a sequel to the 1985 game, Balloon Fight, and generally retains the same gameplay mechanics. However, there are numerous new modes of play, each adding something unique to the Balloon Fight series.

Balloon Fight is back and bigger than ever! Take flight in 8 different modes including the high-flying Helium Fly or take it old-school with the classic Balloon Fight. With new modes, new items and new customization, everything's new in Balloon Fight: Aerial Ace!

The main gameplay elements of the original are retained, with the player flying through the sky on balloons. The player controls a Balloon Fighter, which will usually be their Mii, and can customize their balloons and clothes. The Balloon Fighter has two balloons attached to their helmet which enables them to fly around.

Balloons represent the players life, meaning that if the player runs out of balloons they will lose.

Also in World of Balloons, the player is given their own home they can decorate with the credits they earn from completing tasks. In their home is the options and settings functions as well, including the customisation for character appearance and balloon type/colour.

In the Balloon Fight, Sky Races and Balloon Quest mode, special items can appear to wreak havoc on your enemies. When an item box appears, the first player, or enemy, to run into the item box will get the item. There are currently an unconfirmed amount of items in the game.

In Mode A, one or more players team up to defeat a waves of enemies that appear on the screen. Each player starts with three lives. In Mode B, it's a free for all brawl. Each Balloon Fighter attempts to pop all the other Balloon Fighter's balloons before their balloons are popped. The players balloons can get popped in numerous different ways, either by getting hit, falling into the water or getting eaten by the fish. The items in the game can be used in this mode.

One to four players race against computers, friends or online and try to come first. Tracks are set in 2D or 3D, and are always randomly generated and set in the Morning, Afternoon, Evening and Night portions from the Balloon Trip mode. The items in the game can be used in this mode.

The Game Of Balloons mode is a collection of numerous different minigames that you and computers, friends or anyone online can compete in. There are a total of 20 minigames ranging from Free-For-All, 2 Vs 2 and 1 Vs 3 types of games.

Balord has sent his army of Duckees to bomb the world. Your balloon fighter has to make their way across the world to get to Balord's Lair and defeat him to stop his army. This mode functions like Balloon Trip except with levels.

Similar to the Balloon Trip Breeze attraction from Nintendo Land, players use the GamePad screen to make a gust of wind which moves the player through the 2D side-scrolling stages.

They will have to avoid obstacles on their way and use the stylus to create air gusts, as well as destorying the many things in your way. The mode cycles through days and times of day to mark you progress. After passing through a Morning, Afternoon, Evening and Night section, the player will progress to the next day.

The World Of Balloons mode features a 3D world for the first time in Balloon Fight. The player is given jobs to do in the world such as carrying a present from one person to the other or buying something for another person. The game is intergrated with Miiverse so anyone can post a mission for someone to complete for them.

The player also receives a house in this mode that they can customise with the credits they earn from completing tasks. Credits can be spent at the many different shops across the world. In the house, the player can customise their Balloon Fighter, as well as access the settings and options of the game.

Much like Challenge Mode in Rayman Legends, Balloonboards is a game where Daily Challenges are uploaded for anyone to compete in. The challenges range from "Make It As Far As You Can" to "Survive In The Hurricane". The better the score the player gets, the higher up the leaderboard they go. If a player is in the Top 10, their Nintendo Network ID is highlighted down the bottom of the screen. 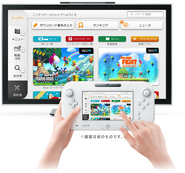 Balloon Fight: Aerial Ace as it appears in the Wii U eShop

Balloon Fight: Aerial Ace as it appears in the 3DS eShop 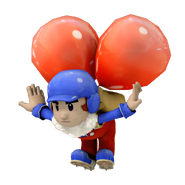 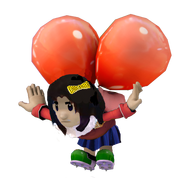 The default female Balloon Fighter
Add a photo to this gallery

References to other Games

Retrieved from "https://fantendo.fandom.com/wiki/Balloon_Fight:_Aerial_Ace?oldid=2535286"
Community content is available under CC-BY-SA unless otherwise noted.