Bagon is a bipedal, blue, reptilian Pokémon vaguely resembling Pachycephalosaurus. It possesses a large, round snout, triangular eyes, yellow, circular ears similar to reptiles, and a yellow lower jaw with two teeth protruding upwards. Three thick, gray ridges cover the top of its head, and continue downwards to cover its neck as well. There is a triangular patch of yellow on its underside. It has stubby, digit-less arms and short legs with two toes on each foot.

Bagon lives in rough terrains with cliffs and rocks. It longs to fly and jumps off cliffs trying to be able to do so. Frustrated at its inability to fly, it leaps off cliffs and smashes its head against large rocks. This process of continually bashing its head causes it to become as hard as steel. Well-developed neck muscles support its hard head. This, combined with its powerful body, allows it to shatter rocks with its head.

Bagon is based on a dragon, but possibly draws some aspects from Pachycephalosaurus, a species of two-legged dinosaur known for their domed heads.

Bagon may be a combination of baby and dragon.

Tatsubay may be a combination of 竜 tatsu (dragon) and baby. 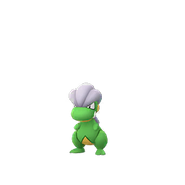 Shiny Bagon from Pokémon GO
Add a photo to this gallery

Retrieved from "https://fantendo.fandom.com/wiki/Bagon?oldid=3284637"
Community content is available under CC-BY-SA unless otherwise noted.