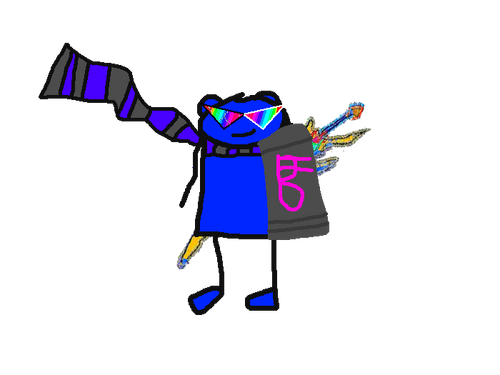 Bad Fuckin' is a character who rules the dimension of Fantendno. He appears to be some sub-species of beorn who vaguely looks like Unten though with the big differences of looking like the MS Paint drawing done by a 2-year-old with parkinsons and some pretty sick rainbow anime shades. He wields the super evil DROS which although having really shitty stats has the ancient dark magic ability known as RANDOM CRITS, an ability utilized only by satanic druids and demomen. Due to being the Tsar Crispy of Fantendno he has the ability to teleport between the two dimensions allowing him to cause trouble in the Fantendoverse. He runs a pretty shitty ABSOLUTELY COOL comic called Fantendno Operate and control the direction and speed of a motor vehicle.(or FOCDSMV for short) In which he and his good friend. He also serves as a sort of reaper for people who the Super-Deities see as "unfunny" with the DROS' random crits teleporting bad jokes to Fantendno.

Bad Fuckin' generally acts lazy and childish in Fantendno because he's the fucking Mayor you can't tell the fucking Kaiser to be mature. However during his travels in the Fantendoverse he attempts to look like a cool-headed hero of the universe and generally fails spectacularly. Though occasionally he manages to do important stuff either by accident or by luck and thus exists in this sort of equilibrium where he's too much of a dipshit for any villains to go hunting after him but he's occasionally useful enough that most heroes can atleast tolerate him.

How Bad Fuckin' came into existence is a mystery just like his homeland's origins. Some theorize that the gods made Fantendno on a drunken bet and after realizing what the fuck they just did panicked and created Bad Fuckin to keep the land stable and generally watch over it because dimensions when left unchecked can churn out some crazy shit. Out of boredom and curiosity the gods created corrupted clones and put them into Fantendno to see how they would react to Bad Fuckin. After some intense duels Bad Fuckin' reigned supreme as Chieftan of the entire Fantendno nation of about 4 people.

Retrieved from "https://fantendo.fandom.com/wiki/Bad_Fuckin%27?oldid=2084276"
Community content is available under CC-BY-SA unless otherwise noted.