Baby Yoshi appears as a playable character in the wii platformer Super Mario Bros: Diaper Duty. His egg is found at the end of the Yoshi Island chapter but he does not hatch until the end of the Sarasaland chapter. He can swallow foes and shoot fireballs.

Baby Yoshi is a player on the Baby Brigade team on the multiplayer wii sports game Mario Rugby League. He is a skillful character with average speed and strength. His special skill is to eat the ball turning it into an egg, he can then throw it all the way to the end of the field.

Baby Yoshi makes an appearance in Super Sloppy Bros., and is obtainable through a Yoshi Egg. His functions are the same as they are in Super Mario World. 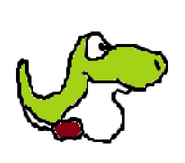 Sloppy Baby Yoshi as he appears in Super Sloppy Bros. 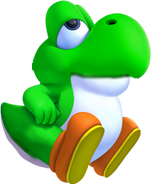 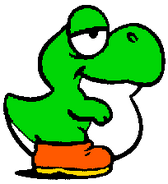 An updated image of a Yoshi made into a baby look.