“That's not Baby Mario! He looks decidedly...stouter. And he...smells funny. He must be Baby Wario!”
— In-game text, Yoshi's Island DS

Baby Wario is, as his name suggests, the infant form of Wario. He first appeared in Yoshi's Island DS as one of the five babies the Yoshis could use. He appears to be very greedy similar to his adult conterpart, as he carries with him a large magnet. It can be used to attract metalic objects towards the player, including Coins and metal platforms and blocks that are otherwise immovable.

Baby Wario makes his debut in Yoshi's Island DS. He, like the other babies, was originally kidnapped by Kamek and his Toadies in search of the Star Children. However, they found his crying to be annoying, and they abandoned him. After Yoshi and the babies defeat Bessie the Bass in World 3, they get washed up by a large wave and separated from each other in a cave. It is here that Yoshi finds Baby Wario, and he brings him along when he finds the babies and the Stork again.

Baby Wario's ability is the large magnet he carries with him. Any metal objects can be pulled towards Yoshi if he's facing the opposite direction. This can include items such as Coins, platforms that are pulled down toward Yoshi, and metal boxes that otherwise are immovable. Baby Wario is heavy like Baby DK and Baby Bowser, and Yoshi has trouble using his Flutter Jump while he is riding him.

Baby Wario assists the group for the remainder of World 3, but after beating Priscilla the Peckish, he leaves Yoshi with a group of Bandits in hope of finding more riches. He appears again in World 5-8, arguing with Baby Bowser about the treasure in the castle, and assists the group once more. During the final battle against Bowser, Baby Wario rides a Purple Yoshi.

At the end of the game, Baby Wario lands on a large raft with a treasure chest floating along the water. However, Baby Bowser also lands in it, initiating an argument with the two. It is then revealed that Baby Wario was one of the seven Star Children all along.

Baby Wario appears in Mario Kart: Infinity Remix as a starting driver. He is a Light character, meaning his Acceleration and Handling stats are good, but his Speed and Weight stats are rather low. He also has really good Traction, but poor Mini-Turbo.

Baby Wario also has an alternate costume in the form of Dr. Baby Wario, unlocked by winning a gold trophy in Grand Prix in any cup as him.

Baby Wario appears in Strikers: All-Star League as a captain. He rides a Yellow Yoshi, who has a mustache identical to Wario attached to his nose, but doesn't like that he has to wear it. He's a Speedy-type captain, meaning he has very good speed (courtesy of riding a Yoshi) but has lackluster stats everywhere else. He weilds a magnet like in Yoshi's Island DS, which he can uniquely use to attract the ball towards him or repel opponents away. 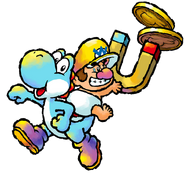 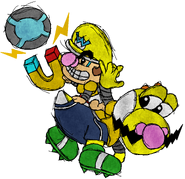 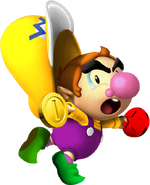