Baby Peach is the baby form of Princess Peach in the Mario games and Yoshi games. Her first appearance was in Mario & Luigi: Partners in Time.

Peach stars as a non playable character in the Wii platformer Super Mario Bros: Diaper Duty. She, along with Baby Daisy and her parents are kidnapped by King Koopa so she sends a distress signal out to the other Star Children.

Baby Peach is a player on the Baby Brigade team on the multi-player Wii sports game, Mario Rugby League. She is a skilled character with average strength but is slow. Her special skill is to use a baby Toad (blue) to prevent tackling.

After a 3 year absence after being destroyed in Dry Bones Party 4, Baby Peach appears in the ending of Dry Bones Party 7, where she gets fully repaired by Mario after Baby Rosalina betrays him.

Because of being fully repaired and Baby Rosalina betraying Mario in the previous game, Baby Peach retruns in Dry Bones Party 8 to ruin the party for the Koopa Troop. 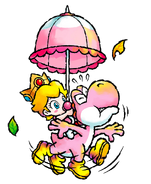 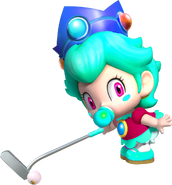 Baby Peach as she appears in Super Mario Spikers.