Baby Mario (Japanese: ベビィマリオ Bebī Mario) is a baby form of Mario from the Mario and Yoshi series. He, alongside Baby Luigi appear in Super Smash Bros. Revolution as playable characters. Baby Mario is Baby Luigi's big brother, and has a crush on Baby Peach. Baby Mario was also friends with Baby Wario, until they grew up. At three years of age, Baby Mario's parents sent him away to Brooklyn, along with Baby Luigi, so that Kamek couldn't take them away.

Baby Mario is the captain of the Baby Brigade team on the Wii multiplayer sport game Mario Rugby League. His team specializes in Skill and Strength, and he has the ability to shoot small fire for long distance tackling.

Baby Mario appears in Mario & Kirby Baseball on his older self's team. He's fast, but has a weak swing since he's a baby. He's one of the best bunters in the game.

Baby Mario makes an appearance in the game Mario and Co.: Baby Battalion, when Mario is turned into a child by the The Adult-to-Baby Gaddget 2000.

Baby Mario is one of the first two characters that you use in Super Mario Bros: Diaper Duty. He can jump on people and throw red fireballs. He is the most average of all of the babies. He is a star child.

In Diaper Duty 2: The Eggs Baby Mario moves from Big City (now Big Ape City) to Toad Town in the Mushroom Kingdom. His level along with his brother is Toad Town where Kammy Koopa has attacked and is taking over. He along with the other star children summons Rosalina and storms Bowser's Keep to free Waluigi, Daisy and Funky.

In Diaper Duty 3: Baby Peach's Turn to Shine Baby Mario is kidnapped by Petey Piranha and must be saved by Baby Peach and Baby Daisy. After being rescued he most progress to save the other babies. He is kidnapped again only to be saved by Peach again.

In Diaper Duty 4: Piranha Plant Storms, Baby Mario along with Baby Luigi, Baby Wario and Baby Waluigi gets eaten by the Super Piranha and must be saved by the other star children as well as the self dubbed "Space Children".

Baby Mario is the starting character of Diaper Duty 5: Koopa Kid Gets Mad and is playable the whole way through. He starts in Toad Town and uses jumping and fire to attack.

Baby Mario appears in Level 4: Star Reunion of Diaper Duty 6: Baby Birdo is Born, where he has been made a god by the Red Yoshi tribe. He asked them to free his friends and they turned against him. He was playable half way through level four and through the rest of the game.

Baby Mario is mainly paired with Baby Luigi his brother throughout Diaper Duty 7: The Nega Star Children. He saves the Noki Master in Noki Bay on Isle Delfino, he frees the slaves of the mines in Chimp Cavern on DK Island, he helped the citizens of Beanbean castle town in the Beanbean Kingdom, he cleared up the Donate Plains in Dinosaur Land and by himself he cleared up the Birabuto kingdom in Sarsaland and did odd jobs around Toad Town in the Mushroom Kingdom.

Baby Mario makes his debut in the Mario Singalong! Series in Mario Singalong Rocks! to unlock him you have to have sung Heart Barracuda in Karoke Mode at least once.

Baby Mario appears in Mario Hoops 3-On-3 Switch as a playable character. He is a Speedy character type and his special move is Hammer Shot. He is a secret character to unlock him you must beat the Mushroom Cup on Normal Difficulty (or above). His default partner is Baby Luigi. His team name is the Baby Mario Dunkers. 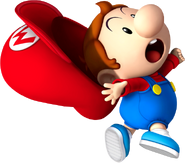 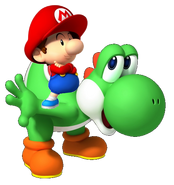 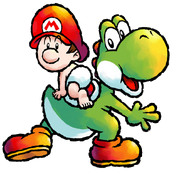 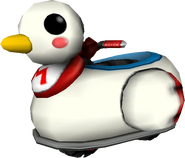 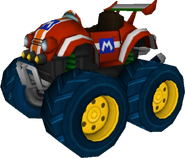