Baby Luigi is the infant form of Luigi. Baby Luigi, like his older self, is described as being meek and cowardly. For the most part he is very friendly too, as he gets along great with the other Babies. Although Baby Luigi is an extreme crybaby, he seems to actually be less cowardly than his older self. Like Baby Peach, Baby Luigi was also kidnapped a lot. He was often rescued by Baby Mario and Yoshi.

Baby Luigi appears as a playable character in the Wii platformer game Super Mario Bros: Diaper Duty. He is one of the two starting characters. He can jump on foes and shoot greeen fireballs. He has a better jump than his brother but is slightly slower.

Baby Luigi is a player on the Baby Brigade team on the multiplayer wii sports game Mario Rugby League. He is a skilled character with average strength but is slow. His special skill is to shoot a small amount of thunder for long distance tackling.

Baby Luigi makes his debut in the Mario Singalong! Series in Mario Singalong Rocks! to unlock him you have to complete Story Mode three times and sing Elvis Presley Suspicious Minds at least once.

Baby Luigi appears in Mario Kart Powers as a small unlockable character. Baby Luigi can be unlocked by unlocking one Staff Ghost, and his signature colors are green, navy and white.

Baby Luigi appears as an unlockable character in Mario Kart 8 Wii U. He can be unlocked by unlocking 10 expert ghost data's. His special move is Boo Ball.
Stats:
Speed: 3.5
Acceleration: 2.5
Drift: 4
Handling: 3.5
Off-Road: 2.5

Baby Luigi appears in Mario Hoops 3-On-3 Switch (mainly known as Mario Hoops 3-On-3 Deluxe) as a playable character. He is a Speedy character type and his special move is Super Jump Dunk. He is a secret character to unlock him you must beat the Mushroom Cup on Hard difficulty (or above). His default partner is Baby Mario . His team name is the Baby Luigi Poltergiest. 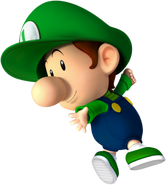 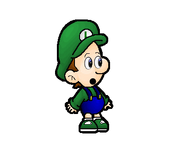 Baby Luigi as he appears in the Paper Smash Bros Series. 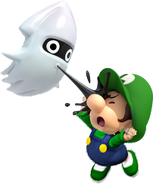