Baby Daisy is a minor character in the Super Mario series who had first appeared in Mario Kart Wii. She is Princess Daisy as a baby. She is the best friend of Baby Peach.

As a baby, Daisy grew up in Sarasaland, living in a castle under the care of her mother, Queen Rosemarie. Rosemarie loved to play with her daughter and taught her the basics of various sports such as baseball, tennis, etc. She also educated her on how to garden plants and flowers. Baby Daisy's love for sports and gardening clearly seems to have carried onto her as an adult.

In Mario Kart 8, Baby Daisy references her love for her mother by sometimes shouting "Mama!" when performing an anti-gravity trick.

Baby Daisy is a player on the Baby Brigade team on the multiplayer wii sports game Mario Rugby League. She is a skillful character with average strength but poor speed. Her special skill is to pull out a flower to prevent tackling.

Baby Daisy makes a cameo in the form of a portrait and when Yellowbelly is playing Super Mario Land, she appears on the screen.

Baby Daisy appears on Yoshi's team in New Super Mario Baseball. Her stats have not been revealed yet.

Baby Daisy appears as a playable captain in Super Mario Spikers, appearing as a Power-type character. Her outfit consists of a beige dress with teal markings, as well as a stereotypical pharaoh headdress and a matching staff. It is implied that she found this outfit after ending up in Dry Dry Ruins, thinking it looked pretty, but in turn gave her sand powers. Her emblem is Daisy's normal emblem inside a flower, much like other Mario games, and her theme is Mawwal.

Baby Daisy is a playable character in Mario Super Sluggers HD for the Nintendo Switch. She has eight palette swaps. 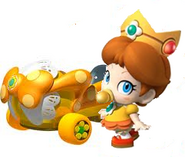 Baby Daisy on her Cheep Charger

Baby Daisy's trophy in Super Smash Bros. for Wii U.