BLOCKade is a 2015 strategy role-playing downloadable title for the Nintendo Chrome. The game was created by Existence Software for the 1st Weekly Challenge. The game's layout is similar to that seen within the Fire Emblem, though includes more active battle tactics, such as timed hits or aiming, in order to entice the player and keep them interested. BLOCKade released worldwide March 29, 2015, and is priced at $1.

Despite the criteria of the challenge, stating that all main protagonists must be blocks, the game stars Tucker Palli, reviving him from a drought of absence outside of cameos within the Adventures of White series.

The circular Spherelings and their planet are attacked by an alien presence. They transform the Spherelings into cube-like creatures, who hold no volition, allowing the aliens to effectively, and easily, conquer their planet. Standing in their way is Tucker, the final remaining Sphereling, who rescues troops from battlefields and commands them to victory, in order to save their planet.

The game is a third person turn-based RPG, similar to the Nintendo 3DS title Code Name: S.T.E.A.M.. The player, acting as Tucker, must command the various Brickworks around the board.

The Brickwork soldiers each hold a single skill, being based around the Fire, Water, Thunder and Earth elements. The elements have a single strength and weakness, and it acts as a game of rock-paper-scissors.

The battlefield where the battles take place are lined with squares. The player plans out their moves on the map by controlling a ghost-like version of the Brickwork whose turn it is After planning the turn, one of the opponent fighters gets to move at the same time, initiating a battle upon reaching the same space, while also able to attack once a certain distance away.

On the battlefield, sometimes neutral Brickworks can appear, and will walk around during turns. Should they be reached by Tucker's forces, they will join the roster of soldiers he can call upon. However, if the alien forces reach them, they will kill them.

A multiplayer mode exists within the game, both online and locally in one of two game types.

Locally, up to four players can work together on a team, playing cooperatively. The players take turns controlling the Brickwork soldiers, making the game either harder or easier, depending on how much communication is done between players.

Online, players can play both cooperative mode and versus mode. Cooperative mode acts the same as in locally, with online chat enabled to allow communication between the players. In versus mode, players work against each other, each commanding their own army of Brickwork soldiers. The versus mode can be played from two to eight players: 1-on-1, 2-on-2, 3-on-3 or 4-on-4.

The Brickwork soldiers have randomly generated names, appearances, stats and abilities, fitting into one of the four elemental types. Once they all die, they are unable to be revived, forcing the player to move wisely.

There are a total of 12 skills that a Brickwork soldier can have, with the damage dealt depending on the attack stat of the soldier. Below is a list of all skills that could be held by a Brickwork.

Scanning amiibo figures will grant the user a random Brickwork soldier of a certain element. Up to three amiibos can be used per day, and, as of launch, all released amiibos are compatible.

An additional two stages are exclusive to multiplayer mode, again including their own type advantages.

In multiplayer mode, it is possible to remove the type advantage on the stage, and this is done by default in fights against strangers online. 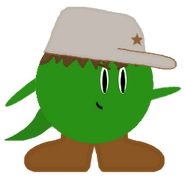 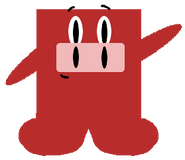 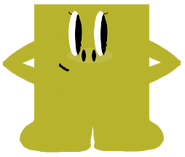 Earth Alien
Add a photo to this gallery

Retrieved from "https://fantendo.fandom.com/wiki/BLOCKade?oldid=2100086"
Community content is available under CC-BY-SA unless otherwise noted.