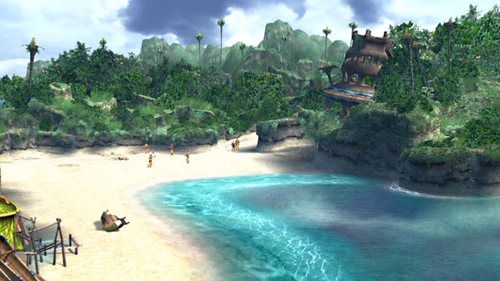 Besaid Beach is a stage created by NepetaLast (t∣b∣c) for B.O.K.O as a Final Fantasy home stage. It is the home stage of Tidus.

Besaid Beach reaches from blast area to blast area, meaning that a character can continue walking from one end to the other without fallling. The left end of the stage is a beachy with some minor pieces of construction that act as platforms that players can jump on. Sometimes a Water Flan will appear from the sides, dealing minor damage, but it can be defeated with one hit. On the right side is an ocean that is filled with water. Some characters have the advantage here, such as Tidus, as they have increased mobility or even power in the water. Additionally, the water slows down both characters and projectile, and decreases the power of fire based moves. All of these factors are big game changers, as are the piranhas that can spawn which deal good damage but are dealt with easily.

Both the piranhas and the water flan can be turned off in the settings, as can the effects of the water, making the stage simply a long stage with some platforms and curves.

Retrieved from "https://fantendo.fandom.com/wiki/B.O.K.O/Besaid_Beach?oldid=2133843"
Community content is available under CC-BY-SA unless otherwise noted.