'“'AXEM RED: We fight for evil!
AXEM BLACK: We live for disorder!
AXEM GREEN: We like what we do!
AXEM PINK: We struggle for chaos!
AXEM YELLOW: We are...
...the Axem Rangers!”
— Axem Rangers, Super Mario RPG: Legend of the Seven Stars

The Axem Rangers are a team of teenage members of the Smithy Gang that appear as a major boss in Super Mario RPG: Legend of the Seven Stars. They appear towards the end of the game where they steal a Star Piece from Mario, Mallow, Geno, Bowser, and Peach in Barrel Volcano, and try to escape using the Blade. They are soon battled and defeated, allowing the heroes to reclaim the Star Piece.

The Axem Rangers are a parody of the Super Sentai series in Japan, which is the basis for the Power Rangers series in the United States.

The Axem Rangers first appear in Super Mario RPG: Legend of the Seven Stars. Mario and friends enter Barrel Volcano in search of the sixth Star Piece, said to be guarded by the Czar Dragon. Unbeknownst to them, Smithy had ordered the Axem Rangers to recover the Star Piece as well. Once the heroes defeat the Czar Dragon, they find the Star Piece, though the Axem Rangers steal it before they can claim it. Following this, they attempt to escape the volcano on their battleship, the Blade. Mario and co. chase the rangers down and battle them on the Blade.

In battle, all five Axem Rangers are battled at once, each having their own stats and attacks. They can be defeated in any order, and once defeated they will complain to Axem Red, who tells them to stand down (in Axem Red's case he will say his head is spinning and can't fight anymore). Once all five are defeated, they combine their strength and use the Blade's Breaker Beam to fire devastating blasts at the heroes. Ultimately, the rangers are defeated, and the Blade explodes. Mario and friends obtain the sixth Star Piece, and travel to Bowser's Keep to obtain the seventh and final one.

Later in the Factory, Machine Made versions of the Axem Rangers are mass produced by the Smithy Gang in their attempt to take over the Mushroom Kingdom. These are monochrome, but have similar abilities to the originals. They are also optional rather than boss fights.

The Axem Rangers in Super Mario RPG: Legend of the Seven Stars 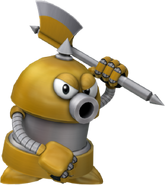 Axem Pink by Peardian
Add a photo to this gallery
Retrieved from "https://fantendo.fandom.com/wiki/Axem_Rangers?oldid=3219069"
Community content is available under CC-BY-SA unless otherwise noted.