Lea (Japanese: リア Ria) is a major character from the Kingdom Hearts series. He is the human form of the Nobody, Axel (Japanese: アクセル Akuseru), and a Keyblade Wielder. While a Nobody, Axel was great friends with Sora's Nobody, Roxas, as well as the Nobody born from his memories, Xion, and the three of them would often eat sea-salt ice cream together in-between missions on the Twilight Town clock tower. Both Axel and Lea commonly use the phrase "Got it memorized?", which he often says while pointing at his forehead with his right index finger.

Axel, the Flurry of Dancing Flames, was a member of Organization XIII, though was not entirely loyal to the organization's goals: in Kingdom Hearts: Chain of Memories Axel worked as a double-agent in order to stop the plans of both the groups of Marluxia and Larxene and Vexen, Lexaeus, and Zexion, and ultimately ended up as the only Nobody to escape Castle Oblivion. Axel's placement as member VIII and control over Assassin Heartless stemmed primarily from the friendship his human form had with that of the original version of Saïx, Isa. He later betrays Organization XIII once and for all to assist Sora and later reawakens as his human self Lea in Radiant Garden.

During the events of Kingdom Hearts 3D: Dream Drop Distance, Lea reintroduces himself to Sora, Riku, and Kairi, and asks Master Yen Sid to train him as a Keyblade Wielder. With the aid of Merlin, Flora, Fauna, and Merryweather, Lea is enhanced with magic to compress the time it would take for him to be granted the ability to summon a Keyblade. After Riku passes the Mark of Mastery Exam and becomes a Keyblade Master, Lea displays the ability to summon his Keyblade for the first time and journeys to Radiant Garden to continue training; he is later joined by Kairi, whom he, as Axel, had previously kidnapped under Organization XIII's orders and thus creating a rocky relationship between them.

As the Flurry of Dancing Flames, Axel's trademark ability was pyrokinesis, allowing him to create and control flames. Lea's Keyblade would show a similar elemental attribute, appearing to combine the design of Axel's chakram with the blade itself possessing a fluid flame-like design.

Lea's most prominent characteristic is his large amount of spiky red hair, which imitates the flames he controls as a Nobody via his pyrokinetic abilities; he has had this same hairstyle ever since he was a teenager, as shown in Kingdom Hearts Birth by Sleep. He also possesses small, but piercing, green eyes; as Axel, he had small red triangle markings pointed downwards beneath his eyes. As Axel and after becoming Lea once again in Dream Drop Distance, he is always seen wearing the standard black coat that all members of Organization XIII wear in order to protect himself from the darkness as he travels between worlds. As a teenager he wore a yellow scarf with two patterns, a checkered pattern on the inside and simple lines on the outside, and an orange sleeveless jacket over a white tank top. He also wore tan pants that displayed his ankles, and red sneakers.

Axel appears as a prominent character in Kingdom Hearts: Chain of Memories II. Kaze, Chikyu, and Lin encounter Axel in Trail Town, and fight him during the game's fourth mission. 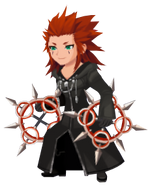 Add a photo to this gallery
Retrieved from "https://fantendo.fandom.com/wiki/Axel?oldid=3228829"
Community content is available under CC-BY-SA unless otherwise noted.