Aurora Morningstar is a character in the Doom Dome Battle series, appearing playable in its first two installments. She appears as a supporting character in Rokukai's Demon Bounty, and again as playable in Warriors of Babylon. She is the daughter of Lucifer and another angel and thus the half-sister of Rokukai. She is the guardian angel, and current girlfriend of Joshua Tamashii and is in training to be a lightbearer by Raphael. In Mission Alpha she has a son with Joshua called Ephraim.

Aurora fights using her golden sword and her mirror shield. She is a fast and light character who due to her species typing, heals herself when using a holy attack. She can reflect projectiles with her shield and deflect physical attacks. Her sword has decent range. She has a few special attacks with holy properties.

Her Doom Attack is Divine Intervention. Aurora splits her sword in two pieces and forms them into nails. She shoots those at the opponent hitting them in the palm of their hands and sends them backwards. She then summons a giant crucifix from the sky to which the opponent is pinned to. Lastly light will shine down so bright that is massivly damages the opponent. If it KO's them their lifeless body keeps hanging there like Jesus did.

Aurora is an angel who was born in the Heavens by Lucifer and another angel. She never met her father and was told stories that we was an angel of enlightment who was killed during battling demons. She grew up with the destiny to become a guardian angel and was appointed to be that of Joshua Tamashii. When he was the age to go to high-school, she was granted to go to the Earth disguised as a human and also could attend high-school there. During this period she fell in love with Joshua, but knew she could never be with him while being his guardian angel as well.

During a regular day on school the catastrophe happened. It knocked her human, Joshua Tamashii, unconscious and allowed Aurora to transform to her true form, that of an angel. She revealed to Joshua, when he was conscious again, that she was his guardian angel and that she would protect him from the dangers happening.

Aurora had to close the Gates of Hell, but Joshua wanted to help. Even though she didn't want it they went to Joshua's house to get his gun. There they encountered Mephistopheles who just killed Joshua's uncle. Joshua engaged in battle with her ordering Aurora to stay back. However the fight was interrupted by Mai who wanted to protect Joshua, causing Mephistopheles to flee. Mai got angered at Aurora when she tried to take Joshua away from the place and engaged in battle with her. Mai loses the fight allowing for Aurora to quickly grab Joshua and flee from the scene.

The two rush towards the Gates of Hell, when arriving there they meet up with Samurai Koh and Jamila Sahota who had come there for personal reasons. They entered but encountered Paimon at Lucifer's throne. Paimon locked them up in special cages from which even angels couldn't escape. Jersey Devil however made his way to the throne and battled Paimon and won. He freed the others afterwards. After a heated discussion between Jersey Devil and Jamila, other demons arrived.

Aurora was locked into battle with Mephistopheles and they talked about the heavens and hell, it both being terrible places. Mephistopheles however said she was bound and loyal to Lucifer, and always will be. Aurora says the same over Michael and they agree it is a shame as they could have been friends in another situation. Joshua suddenly entered a state of rage, him turning stronger and wilder, and uncontrollable. The demons were knocked away and Aurora tried to get a hold of him. Yggdrasil appeared and locked him in her whip and guided the humans to the surface.

Once they reached the surface they were quickly drawn into a battle with Soluna along with many other warriors. Afterwards Aurora embraced Joshua and turned into her human appearance, promising she will always protect him, Joshua returns the same words and they give each other a tiny kiss.

Aurora returns in the sequel as a playable character. Her story will revolve around her being the newest member in the Earth Brigade, tasked to protect the Earth. She also discovers that Lucifer is her father and has trouble coming to terms with that, and wants to find out how he became so evil.

Aurora is a supporting character in Rokukai's Demon Bounty who first appears at the start of the game at the Wildefort high school where she is with Joshua and Prince. She appears at the endings of the Stage 2 levels that lead to the good route in the Stage 3 level: Heaven Gardens.

She takes Rokukai to the Heavens because Seben is suspicious of Judas, who has been acting up ever since Yggdrasil was stationed on Earth. She requests Rokukai with the help of Seben to collect all the evidence which would lead to Judas apprehension. She has to help Yggdrasil escort Judas away to ths prison.

She doesn't appear until the Hero ending where she is seen chilling with Rokukai and the other teens. She does a similar thing in the true ending where she walks off into the distance along with them.

Despite not appearing in the game, her son Ephraim does appear who she has together with Joshua. Her status in this alternate universe is unknown.

Amaya Havens in Warriors of Babylon 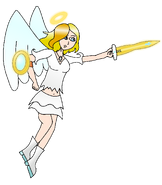 Beta design
Add a photo to this gallery
Retrieved from "https://fantendo.fandom.com/wiki/Aurora_Morningstar?oldid=3141433"
Community content is available under CC-BY-SA unless otherwise noted.