Fantendo - Game Ideas & More
Register
Don't have an account?
Sign In
Advertisement
in: Articles under Construction, Free to use Characters, Characters,
and 17 more

Aurora is the main character of Fantendo Smash Bros. Scarlet Skies, which acts her original debut. She is a Catalyst like Reese. She only uses her catalyst abilities to gather forces to fight the White Army. She carries around something called the "Grasshopper Blade" which can expand and allow her to hurdle over enemies and foes and land on them, as well as using color based magic.

She is one of the few characters that appears in all three games of the Shattered trilogy. In a way, she can be considered the trilogy's protagonist.

Post-Shattered she takes somewhat of a backseat role as she studies in Boltzmann University, making a cameo in Fantendo - Genesis and not fully making a notable appearance until Fantendo Sports Resort. She is currently the girlfriend of Fera.

In all her current appearances, Aurora has red hair with blue strands on the right of her face (although during her time as White Goddess' slave she had white and green hair), and a "aurora" visible in her "back hair". She also keeps a pair of glasses and a piece of technology (unknown in function) strapped to the right side of her head.

Typically most of her designs have her in something resembling school clothes although in Shattered she wears something closer to a elegant dress, although her design traits are still present.

During her time at Boltzmann, she gained more of a hoodie jacket look, although most her main design traits were not changed. She also has two different pairs of socks, one being pure blue and the other red with yellow stars.

In Fantendo Sports Resort, she wore a white and black sports bra and pants, with a tie.

In general, Aurora seems to have a funky sense of fashion, but she's getting better at coordinating her strange outfits. Not that Fera really minds.

Aurora is very determined for her causes but also can be incredibly personal with those close to her. She keeps her friends close, and her enemies closer. As such though, she can be damaged by her relationships far too easily, with long-term psyche effects. Although most of the time she is fairly laid-back, she can easily go into tirades and rants if pushed too much.

She also is confused by her own feelings very often, often needing to realize things about herself through conversations with others.

She is a bookworm, although she seems to have exhausted through most of her books and struggles to find anything worth reading in her eyes. She plays guitar rather well and even taught X-Ray how to play a little bit. While most of time in the Post-Shattering universe was spent at Boltzmann, she cares for her cousins Reese and Rhyse and played in their band before she headed to Boltzmann.

During Fantendo Sports Resort, she had a overwhelming crush on Fera, which she later admitted to. Finishing her studies later that year, she tries to spend as much time as she can with her.

While younger and unexperienced in the timeframe of Cracked, she had a crush on Zelena Neon. As tbe story would have progressed, Zelena and Aurora would have grown closer as Koyn Kisunagu sacrificed himself to move the Shattering out of the Wasteland.

Fera and Aurora meet in Fantendo Sports Resort and get off to a friendly start that quickly gets Aurora to crush on her. After Aurora asks for advice from several characters like Leah and X-Ray, she decides to just tell Fera how she feels and the two kiss, beginning to date. This relationship is continued after Sports Resort as Aurora finishes up Boltzmann University studies. The two are still a thing around the time that Victory starts, as Aurora, freshly graduated, tries to spend as much time with her as possible.

During the events of Fantendo Smash Bros. Shattered, it was noted by Hein and Johnathon Hades' group that she spoke of Zelena during her sleep.

In Fantendo Smash Bros. Scarlet Skies, this turns out to be what her main motivations to stopping White Goddess, as she wanted to rescue Zelena from White Goddess. However, this failed, and even after she was freed from her mind control during Shattered, Zelena is nowhere to be found, having become the mysterious Zeitgeist instead.

As revealed in Fantendo Smash Bros. Cracked, Zelena Neon was a recolor of Leah Needlenam that a younger Aurora crushes on. After Koyn Kisunagu sacrifices himself to move the Shattering, Aurora and Zelena became closer.

Aurora and Zelena never reconciled during the events of Shattered, and Post-Shattered Zelena is nowhere to be found.

Although RedYoshi was skeptical of her leadership abilities, she proved herself to be a capable leader to him and the two became very close friends. Aurora attempted to rescue RedYoshi and the rest of her group during Fantendo Smash Bros. Shattered, but the Assist Pearls were never meant to be freed according to White Goddess. The relationship is likely forgotten as Shattered ends, but maybe they'll meet again...

Aurora primarily uses her Grasshopper Blade in her attacks, which is a blade made of grass. This blade expands and contracts not unlike Imperium and can turn into a helicopter blade to lift into the air. The blade is shown to be strong enough to cut through metal and does not need to be resharpened. Aurora can additionally summon the blade anywhere with grass if she doesn't have it on her person.

Aurora also has color-based magic she can use. The two main spells she uses is Aurora Chant, which is creates a mini aurora borealis that damages opponents and can absorb projectiles from a distance. Aurora can set one up and then use this attack again to use the absorbed projectile. The other spell is Colorehama, which is a chargable energy ball that depending on the color, does more damage. The damage spectrum is based off the color heatness spectrum, with the hotter colors doing more damage.

She can also play guitar as well as teach it.

Aurora as she appears in Fantendo Smash Bros. Shattered. 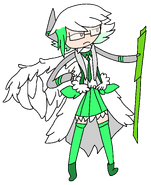 As she appears as a boss during story mode.

Aurora on the boxart of Fantendo Smash Bros. Scarlet Skies.

Aurora art from Face Off