Aura Synesthesia is a humanoid girl with the ability to concentrate her appearance and personality into ten alternate forms based on certain colors, called "Auras," each with their own personalities and physical abilities. She lives in Firefly Town on the planet Junkyard.

Not much is known about Aura's past before living on Junkyard, though it is known that she was sent to Firefly Town through outer space. After landing on Junkyard, she was soon adopted by the Synesthesia family and named "Aura." She was exposed to some forms of radiation while in space, which the citizens of Firefly Town assume is the explanation behind her form-changing abilities. These abilities began to develop roughly a year after her landing, though she stopped adopting new forms after she turned 12 for unclear reasons.

In her original form, Aura has short blonde hair that covers the top half of her face. She typically wears a black dress with eight colored ovals at the bottom representative of her Auras (except for black and white) in her normal form. Her clothes and hair tend to change when she changes form, though she maintains her dress as her White, Yellow, Purple, Cyan, Blue, Red, and Black Auras. As White Aura, her hair is noticeably longer in the back; as Red Aura, she wears a jacket over her dress; as Orange Aura, she wears sunglasses, a small hoodie, and shorts; as Yellow Aura, she has slightly longer hair with a blue streak and a star pattern on her dress; as Green Aura, she wears a long hoodie and pants; as Cyan Aura, she has longer hair, wearing a necklace in the shape of a quarter note and holding a pair of drumsticks; as Blue Aura, her eyes are visible behind a pair of glasses, and she wears a scarf over her dress, which has Greek letters visible; as Purple Aura, she has longer hair with a beret, and paint splotches cover her clothes as she holds a brush; as Pink Aura, she is visibly angrier, wearing a sports bra and shorts; as Black Aura, her hair is tousled, revealing her face, and her dress has lace sleeves and a spider-like pattern.

In Aura's Chains, her appearance slightly changes. Two chain ropes protrude from her back as limbs, and she unlocks two bracelets that appear on her right and left arm respectively over the course of the game. Both of them have oval shapes on them similar to those on her dress. The oval on her right arm is colored brown whereas the one on her left arm's bracelet is gray; both of these bracelets are intended to represent the new forms she unlocks in this game.

Aura appears in Fantendo Sports Resort as a playable character with a minor appearance in the story mode. Stella Universe appears as her doppelgänger in this game, though she and Aura do not appear on-screen together until Aura's Chains.

Aura as drawn by Exotoro.

Aura as a "chibi plush thing," drawn by Drebbles 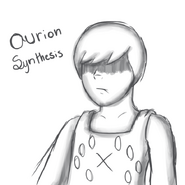 "Aurion/Orion Synthesis," a genderbent version of Aura drawn by Yveltal717 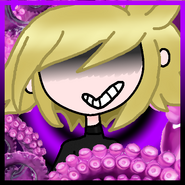 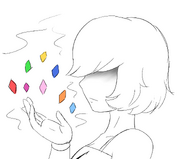 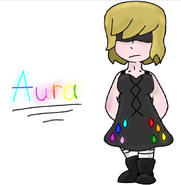 Retrieved from "https://fantendo.fandom.com/wiki/Aura_Synesthesia?oldid=3218213"
Community content is available under CC-BY-SA unless otherwise noted.