Audrey Louise Renton (Known as Amity among the Squirrel Scurry) is a character in Human Nature and is the first of the Forest Children introduced. Audrey was adopted by the Squirrel Scurry faction of the Fallen Woods and is their prized fighter. Audrey is later brought to Society where she is reunited with her birth father by Hope.

Audrey was a mere 3 weeks old when her mother, father, and grandmother had to flee their base in Limestone City after a horde of mutants broke through their barriers. Audrey's father attempts to fight off the mutants with a baseball bat but is overpowered, he yells for his wife and mother to run away with his baby daughter as he continues to attempt to overpower the mutants. Audrey's mother and Grandmother quickly leave through a hole in the back of the building and make off down the street. As they reach the end of a broken road, some mutants appear from the wreck of a car and chase after the three. The grandmother fights them off, ordering the mother to run into the forest away from the city and protect her granddaughter. Reluctantly, she agrees and runs into the woods away from the city and mutants. 4 days pass and the woman is on the verge of death, stumbling through the trees before falling down to her knees and propping herself up against a tree. She says sorry to her baby and closes her eyes prepared to die. A scurry of Giant Squirrels pass by the dying woman, they stop and talk among themselves before making off with the baby. The Squirrels take her to their Squirrel City known as the Scurry and introduce the baby to the leader of the Squirrels, Aycra. Aycra names the baby Amity, and elects to raise the baby as a warrior to fight off the rival faction, the Foxes Burrow. Aycra orders all of the Squirrels to collect enough acorns and nuts in order to give the child a healthy development and allow her to become a powerful fighter. 17 years later, Amity is set to fight in a war against the other Factions for full domination over the Fallen Woods, but her Human Nature kicks in and she wants to fight alongside the Humans.

Audrey is a short, dark-skinned, human female with thick black curly hair styled in a vintage bob cut. Her eyes are large and almond-shaped with deep brown irises and black pupils. Audrey's outfit consists of a shoulder strapped fur tank top that cuts off at her midriff. She has a dried vine belt that has fox tails hanging down from the sides. Her pants are made of a leather-like substance and she has mid calf boots with squirrel fluff lining the rims.

Audrey's relationship with Axl is a complex one. At first, the two are displayed as mortal enemies, with Audrey being from the Squirrel Scurry and Axl from the Fox Burrow. After a battle leaves the two trapped inside Inkcap Cave, Audrey spares Axl's life when her Human Nature kicks in and the two are forced to work together to escape from Scribble. After exiting the cave the two reluctantly part, this is short lived as the residents of the Raccoon Crescent capture them both and take them to Phyllis. Phyllis' change of heart leads the three of them to the Panda Tribe and the introduction of Axl's sister, Gigi. Their relationship is strained after Gigi sides with Audrey over Axl and the two remain separate until the Society attack when all of the Humans band together to defeat the Animals incoming attacks. In the Epilogue it is hinted that the two may have started a romantic relationship together but this is still up for debate.

Audrey and Phyllis have little interaction but the two are seen to be on good terms. Audrey consoles Phyllis after the death of Luna and with Axl's help the three leave Raccoon Crescent for the Panda Tribe. Later, while running from Mutants, Phyllis is dragged to the ground by some mutants and believed to have been bitten, Audrey pulls Gigi away from Phyllis believing her to be already dead. Audrey mourns over a corpse that is believed to be Phyllis' mutated body and is later relieved to find her alive at Eagle's Roost. After her retrieval, Phyllis is shown rarely interacting with Audrey until the Society attack when Phyllis' protects Audrey from an incoming Acorn Bomb before the initial battle begins. In the Epilogue the two are shown to be on good terms and Audrey is seen attending the wedding of Phyllis and Gigi.

Gigi and Audrey are shown to be decent friends. After learning that Gigi is a trans woman, Audrey is shown to be fully accepting and doesn't treat her any differently. Audrey and Gigi's relationship is heavily strained after she pulls Gigi's hand away from Phyllis' while outrunning the Mutants, with Gigi claiming that Audrey did this out of spite and hate. Believing that Phyllis had been killed and mutated by the mutants, Audrey offers to put down what is believed to be the mutated corpse of Phyllis, Gigi denies this and kills the mutant herself, blaming Audrey for Phyllis' "death". After learning Phyllis is safely in the hands of the Eagle's Roost, Gigi slowly begins to forgive Audrey. They rarely interact again until the Society attack when they fight alongside one another. In the Epilogue the two are shown to have made up and Audrey attends her wedding.

Although Audrey and Ahmed's interaction is limited, the two are shown to have decent chemistry. Audrey is shown to be impressed by Ahmed's fish catching abilities and offers to trade him some Acorns for Salmon. During the clash between the Panda Tribe and Grizzly Quarters, Audrey sides with Gigi over Ahmed, straining their relationship. When the mutants arrive at the battlefield the two sides are separated and the two are left separate until they reunite at the Porcupine Fortress where he informs them of Phyllis' whereabouts. During the retrieval of Phyllis, Audrey convinces Ahmed to take Eden to Society where they can start crafting and practicing using weapons. During the Society attack, Audrey pulls a mutant from Ahmed and the two fight off the Animals together along with the other Humans. In the Epilogue Audrey and Ahmed are shown to be close friends and are seen fishing together.

At first, Eden's spoiled attitude and reluctance to fight annoys Audrey and she believes she has no use. When it is revealed that Eden has highly advanced carpentry and craft skills the two begin to tolerate each other. Audrey sends Eden away to Society later on with Ahmed to teach the Humans how to craft and use weapons. Audrey is shown to be impressed by Eden's ability to fly in her feathery dress and is saved by one of Eden's projectiles during the Society attack. In the Epilogue Audrey is shown sleeping while Eden tries to teach her how to sew and make clothing.

Audrey and Damon's relationship is originally very weak, as Damon slashed Audrey's arm while patrolling the fortress perimeter but spares her life as he feels they are similar beings. Later Damon's hack and slash ability help to save Audrey's group from the mutants and the two become friends. Damon teaches Audrey's group how to navigate through hordes of mutants without being put in too much danger. Audrey later learns that Damon had been exiled from the Porcupine Fortress for sparing her life and feels guilty. Damon and Audrey rarely interact much after this point but are seen fight together against the Animals. In the Epilogue Audrey can be seen cheering for him in as he races against Eden.

Audrey and Hope have very little interaction. It is revealed that the humans Audrey saw being attacked by mutants when she was child where Hope's parents who had left the early Society in search of food for their infant daughter. Audrey is seen protecting Hope along with the other Humans and fight against the Animals. In the Epilogue, Hope appears to have been made the leader of Society and is shown enjoying cake with Audrey at Gigi and Phyllis' wedding. 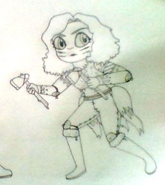