Audino, known in Japan as タブンネ (Tabunne), is a Normal-type Pokémon from Unova. It isn't part of any evolutionary line. It can be found all over Unova whenever there is a patch of rustling grass.

Audino will get a Mega Evolution, and will be known as Mega Audino, becoming Normal/Fairy.

Audino is a bipedal Pokémon which is mostly pink, but has a cream-colored muzzle, belly, waist, hands and short legs. The patterning on its chest and belly makes the pink on its body resemble a jacket. It has three fingers on each hand and two toes on its stubby feet. It has two oval, sky blue beady eyes. A fluffy, white tail is seen on its rear. Audino has large, pink, floppy ears, and each ear has a curly, frilled rim in the same cream color as its belly. It has special earlobe-like feelers in the shape of a cochlea, that can be extended by the Audino.

These feelers can be used as a stethoscope. It places one of its feelers on others to listen to their heartbeats so the Audino can tell how they feel. It can also use its feelers to detect life in a Pokémon Egg, so it can tell when it might hatch. An Audino's auditory sense might rival that of a Clefable: it has an inner ability comparable to radars, to understand its surroundings through the quietest sounds.

When Audino Mega Evolves, the pink on its body turns white, and becomes a loose coat around the abdomen. Its ears will stand upright like rabbit ears, and its earlobe-like feelers become longer and curlier. Its blue eyes become red, and sparkle more than ever. Its white, fluffy tail becomes even larger, and it gains a similar tuft of hair on its chest, which also has expandable feelers attached to it. Finally, its feet are covered in white fur, and two fluffy attachments are found on its ankles.

Mega Audino can emit a special pulse that reduces others' hostility and calms down anyone in the pulse's range. The feelers on its chest actually puts anyone who touches it in any sort of way in a very deep sleep. With an increase in its defensive stats, Mega Audino makes a great supporter in Double Battles. 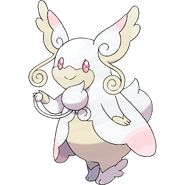 Audino may be based on a rabbit, and may also be inspired by a nurse or physician. The function of the feelers on its earlobes are a direct reference to stethoscopes, and the feelers themselves resemble a cochlea

Audino comes from the phrase "I dunno", mixed with audio.

Tabunne may be derived from 多分ね tabun ne ("maybe") or 多聞 tabun ("many are heard").