Fantendo - Game Ideas & More
Register
Don't have an account?
Sign In
Advertisement
in: Free to use Characters, What is the New Fantendoverse?, Fantendo Smash Bros. Combat (erictom333),
and 11 more

Asuna Monaka Napoleon (formerly named Spumoni Monaka Napoleon and simply known as Asuna in much of the marketing for World Tournament) is a super wrester that participated in the World Tournament, although the conditions under which she was doing so were seen as cheap and illegitimate due to the way the announcer was counting down her pin-downs. This type of cheating was set up by her father Drago Napoleon to set her up as the victor of the tournament, although it was eventually exposed by Vicky Victorious. Asuna's aura would flare up in response, leading her to become the final challenger of the World Tournament, with all contestants fighting against her. The character was created by Exotoro as a way to introduce a more traditional kind of opponent for the World Tournament- something along the lines of a Street Fighter character in terms of power-set, but also to add additional conflict in the World Tournament that wasn't just the fights themselves.

Asuna is a super wrestling champ with an undefeated 23 match streak and most of her details are not known for much of the tournament. She has two unique Aura colors, which were actually transferred power from her mother and father as revealed later on, as she lacked the ability to produce her own Aura for a mysterious reason. She is also revealed to be transgender- choosing the name Asuna for herself during her transition. During the finale of World Tournament she under goes a Aura transformation that is the manifestation of her parents' expectations for her, known as Aura Angel Asuna, and becomes essentially the "final boss".

Asuna is a woman with cyan and pink hair, which appears red in certain lighting conditions. She wears a crazy wrestling outfit with cyan and pink stripes with a yellow tiger pattern across the left cup of her bra and pants. She wears yellow boots and she has a bunch of patterns etched across her face, such as a black line across her nose and under eye area and two yellow stripes on her cheeks. She has a blue and pink iris, making her heterochromatic. She also wears a blue and pink arm length gloves.

Asuna's personality is fairly cheerful when off the field, although she has a tendency to play into more of a villainous role in the ring at Super Wrestling. In World Tournament she wasn't playing a character, so she treated her opponents with respect. She has a thing for flashy introductions, first being introduced by taking off a big fur coat. She has a determined personality, literally telling her opponent she won't ever give up.

However, Asuna's determined attitude is likely a result of her parents putting their expectations on her, as they invested a lot into her that can't be conflated to a monetary value. These expectations pile on her and make her become Aura Angel Asuna- a powerful opponent that all the competitors have to take out due to her Aura forcefields and powerful wings.

Additionally, Asuna seems to have a distaste for opponents that are only into fighting to hurt other people- Asuna sees fighting as a sport and a way to protect others. She lacks hatred in her heart and is choked up by the guilt that she was possibly unknowingly cheating when Vicky Victorious did an expose on the tournament.

Asuna appears as one of the competitors in the World Tournament story, making her debut in it. She appears first against Noora Natsumi, who she wins against via a pin down. She then faces against Spree, which she also wins via a pin down. As both Noora and Spree continue into the tournament to excelling results, foul play is suspected. She faces against Netnu next, who she disapproves of but is unable to get much of a hit on him until she activates her Hyper Mode orb, causing him to retaliate with his own. She wins the fight after getting in a good punch which sends Netnu flying.

Her battle with Strafe seems to emerge as a new victory until Vicky Victorious reveals that all of her pin-downs have had far faster counting than any normal pin-down. Drago Napoleon concedes immediately, leaving Asuna confused and panicky as she is revealed as a cheater, even though she was not even aware that she had been cheating to begin with. While Drago attempts to set things right by making Marco the fall guy, Strafe realizes very quickly there is much more going on and talks to Drago about the fact she is his daughter. Asuna is at loss for words and herself, beginning to feel her Aura work against her.

After the final round between Strafe, Spree, and Noora, Asuna appears again in a new form known as Aura Angel Asuna. Aura Angel Asuna attacks the three and the rest of the competitors work to stop her from killing them in this crazed form. They manage to succeed by using as many powerful attacks as they can, with Millyrain gaining assistance from Unten Bluzen and Fera with two new symbols that give her their powers, Midas Unten making a grand return thanks to Mynis and Reten using a Hyper Mode orb cannon to blast her into the wall with enough power to finally subdue her.

Asuna is mentioned as Drago talks with the Fantendo Firehouse about her and the full story of how she got her powers and why Drago would be willing to cheat for her to succeed, with it being revealed that her powers come bestowed from her parents.

Asuna has a wrestling inspired moveset with how she grabs people as well as using punches and kicks, but uses Aura to power up her attacks. She can use aura projectiles to get opponents from fair as well as use Aura to enhance her speed. She can also power up her Aura in her Hyper Form and has an aura transformation known as Aura Angel that uses her maximum power, which becomes quite strong as her powers are inherited from two powerful Aura users at their peak. 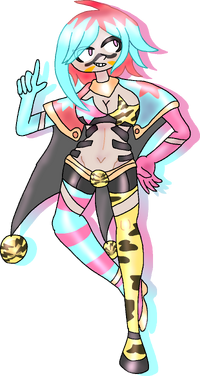 Hyper Form Asuna is the full name of Asuna's Hyper Mode transformation, which she first activates against Netnu in their fight in the World Tournament. Part of the decision to activate this form was likely out of disrespect for Netnu, who stated he found the Hyper Mode forms as a form of cheating and was managing to keep a good pace above her for a while. While in this form, Asuna's Aura becomes further energized across her whole body- even when slamming into the ground, she is able to release Aura in the form of colored Aura shockwaves. Asuna proceeds to finish the fight with a single punch to Hyper Form Netnu, slamming him against the arena wall in her only non-ring out win.

Hyper Mode Asuna takes on longer bangs and a new version of her outfit, where the bra cups become star-shaped and she wears a golden neck covering as well as a cape bearing her colors. She also gains leggings with her patterns and her pants become black and tight. She also now wears a golden belt with her Hyper Orb in the center, with two more Hyper Mode orbs dangling off the cape. Her gloves also extend up to the highest possible point. Her leggings and gloves feature "cuts" at a diagonal that show her bare skin. She is generally more covered up in her Hyper Mode form.

In this form, Asuna is able to activate the full potential of all of her Aura powers, able to use her full body aura into the weight of punches for instance. It puts a huge toll on her and she cannot maintain this form long, or take much damage from it. She is not shown in this form for very long, so it's difficult to say what the full extent of her power is, but it was enough to slam a fellow Hyper Mode user into the wall with a single punch. She can also easily combine her two auras into one powerful attack.

She seems to become much more cocky in this transformation, although also more emotive in general. When Netnu brought out his Hyper Orb, she responded with shock. 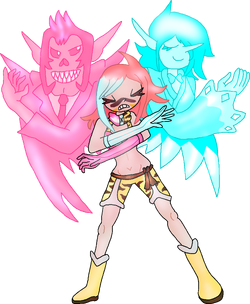 Aura Angel Asuna is the name of Asuna's Aura transformation that she underwent during the events of the final round in the World Tournament story arc. Fueled by the crushing feelings of not being able to live up to her parent's expectations, Asuna became a very powerful being that had giant wings extend out her back, which were able to grab and attack foes using enhanced Aura techniques. The wings also took on the likenesses of Drago Napoleon and Mochi Napoleon, her father and mother. Asuna's eyes also underwent a transformation, becoming dark with her pupils glowing, and she foamed out a blue and pink liquid.

In this form, Asuna was completely out of control and struggling to even breathe normally, becoming crazed and wanting to steal the title of World Tournament champion from the rightful victor. She wanted to prove she was not a cheater as well, although the match quickly devolved into chaos after she attacked the three finalists. With the combined help of everyone else at the tournament, they were able to subdue Asuna by hitting her with Reten's Hyper Mode Orb cannon, which was one of the strongest attacks in the tournament.

While not on screen for very long, this form put quite the toll on Asuna in that she was not able to recover physically from it for a full month. She was able to use Aura Bubbles to keep people contained and prevent them from attacking her, as well creating a Aura forcefield that only cracked under severe pressure. Her fighting style also became unrestrained and violent.

It is unknown if she can tap into this transformation again, or if only through severe emotional distress.

Asuna only directly meets Strafe in their fight together with him, but she quickly manages to pin him down and win with the rigged counting cycle. When the cheating is exposed, Asuna undergoes a crisis as Strafe watches, becoming something of a fighter against the way she has been dropped in the tournament. This continues during the rest of the tournament and even after, with Drago being asked to fully explain his actions. Strafe seems to see the side of him that is abused by his parental figures in Asuna, although as Drago states in his talks with him, it's not that simple.

After World Tournament, it seems like Strafe was interested to spar with her as training for both of them, as they were robbed of a proper fight in the tournament due to Drago's rigging of his own tournament.

Drago Napoleon is Asuna's father, as it is revealed late into the World Tournament. Due to the fact she was unable to produce Aura like her father and mother, Drago gave his up so she could benefit from his powers. They seem to have a close bond, albeit one where Drago is not fully confident in her abilities yet to the point where he feels like he needs to cheat the tournament in her favor. This seems to have hurt Asuna a lot emotionally as her Aura Angel transformation would show. Despite this, they still love each other as a family and Drago has notably relaxed more on his expectations for her, as Strafe and the results of the World Tournament showed that she can do it on her own without further help from him.

Asuna as she appears in World Tournament 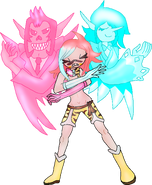