Ashura is a glitch character from the Sonic series. Because it is a glitch, it has made no 'official' appearances outside of accident; from this accident, we learn that it is a green and black recolor of Sonic.

Ashura makes an appearance in Sonic Heroes 2 as part of Team Covert. In this game, it is a female and like all of the team's members, she is incensed by her being shunned; Ashura is by far the most vocal about it. She speaks with a fast, inarticulate, working class, very loud common accent and incessantly. Aside from this, she does very little; in this respect she can be seen as a feral teenage version of Sonic.

Ashura makes an appearance as the main character.

Ashura appears in this game as one of the minor glitch characters along with Wechnia in this game. Jenny does not seem to like her. She is also the Glitch Princess in this game.

“To me, this one is annoying. She seems to talk too fast, and SHOULD be more like that non-glitch hedgehog.”
— Jenny

Ashura appears in Shards of Reality. In this game, it is a fast-talking green and black hedgehog. She (or he?) has been driven mad from existing as an outcast in one world and as an error in another. Her motives are obscure, but she is no doubt a dangerous foe. 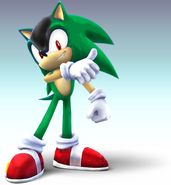 The original Sonic the Hedgehog 2 view.

Add a photo to this gallery
Retrieved from "https://fantendo.fandom.com/wiki/Ashura?oldid=1959727"
Community content is available under CC-BY-SA unless otherwise noted.