Ashlyn, also occasionally referred to as the "Eyeless Wanderer," is the primary protagonist of Dark Echoes. She is a wandering blind woman hailing from the noble and almost-extinct Sulluna family.

As far as personality goes, Ashlyn is generally very dark and moody - an obvious result of her living with perpetual darkness in a world filled to the brim by monsters with a taste for human flesh. She is a pessimist by nature, always assuming that the worst-case scenario is the most likely to happen, but also stubbornly aggressive enough that she rarely resigns herself to just letting said worst-case scenario happen. Her pride is a sore spot for her, and she despises the feeling of being wrong about something. Due to her experiences in the wildlife of Embrenze, Ashlyn is very slow to make friends. She is a naturally untrustworthy person, and automatically picks out the worst in people. She never takes anything at face value, which has occasionally saved her from deceptions but more often prevented her from obtaining valuable allies.

She is aggressively gluttonous when it comes to foods, and time in the wilderness has dulled her appetite to the point where she'll eat almost anything, regardless of how overcooked or undercooked it is. As such, she has an impressive resistance to food poisoning, and will sincerely compliment even the worst of chefs. Her hobbies include hunting and composing music on her bandolin.

Ashlyn's greatest strength, ironically, is her sensory abilities. While blind, her hearing is second to none. She uses the footfalls of nearby beings to determine their locations relative to her, and uses the echoes of her own footfalls to get an idea of the terrain. She can also enter a mode of Focus, which allows her to pick up even the smallest of auditory details. However, noises that would normally just be merely loud are also amplified drastically, and if she is Focused these noises will momentarily deafen her, leaving her truly blind to her surroundings.

To protect herself, Ashlyn generally carries an heirloom rapier and a shortbow, though she is experienced in other weapons as well. She can also use a moderate level of Fire magic by channeling her body's spirit energy. Of course, her weapons are not just simply useful for combat. She can also use them to help her navigate her surroundings, such as using the sounds of her arrows impacting the ground to sense distant enemies. 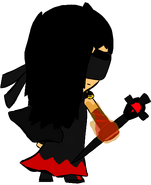 Placeholder art of Ashlyn made with the Gaia Online Avatar Maker. Used to conceptualize the character's design and to act as a placeholder until official art can be procured.

The artwork on Ashlyn's Face Off! card. Drawn by LegendaryHero1023 (t∣b∣c)

The front side of Ashlyn's Face Off! card. Drawn by LegendaryHero1023 (t∣b∣c)

The back side of Ashlyn's Face Off! card. Drawn by LegendaryHero1023 (t∣b∣c)

Retrieved from "https://fantendo.fandom.com/wiki/Ashlyn?oldid=2821884"
Community content is available under CC-BY-SA unless otherwise noted.