Ashley is a young woman from the RTAverse. An extremely brash professional skateboarder with plenty of titles and energy, Ashley can put anyone to shame with her skill.

Ashley was born in Colorado, to Ukrainian parents, and grew up in her hometown of Thornton. Ashley first got a taste of skateboarding when she was 7, and her parents bought her a PlayStation with Tony Hawk's Pro Skater. Ashley became hooked on it and eventually bought a board herself a year later. After starting out rough, Ashley picked up the pace and shot to stardom. She achieved professional status when she was 11.

Ashley started to really shine when she was 14, and took the women's X Games by storm, winning the Big Air event. After a few years, she was put into the men’s contest to see how she'd fare. Again, Ashley took the contest and made history. She became rich and famous, and started getting a reputation for her odd choice of using boots while skating.

When Ashley finished high school, she moved to Portland to try and find someone to have as a teammate. Upon arrival, she met Ash Thompson, a skater who wanted to get recognised. Ashley took him on board, and helped him get to amateur status. She continues to ride with him to this day.

Ashley is brash, and loves making noise. She goes against what people tell her to do, but she can stay out of trouble. She is also very tough, and she likes to show this. Ashley loves to knock out anyone who enters her territory without permission, or attempts to break up an organised skating event. As a result, she has knocked out multiple police officers and about ten news reporters trying to get information on Ashley's Megaramp and halfpipe just outside Portland's city limits. 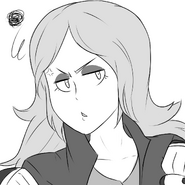 Ashley, as drawn by Trucky (t∣b∣c) 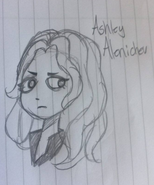 Ashley, as drawn by Cassadony (t∣b∣c)
Add a photo to this gallery

Retrieved from "https://fantendo.fandom.com/wiki/Ashley_Alenichev?oldid=2498315"
Community content is available under CC-BY-SA unless otherwise noted.