Although she didn't appear in Dark Woods, the Plague Master was already beginning the plan to make her. He was trying to summon the 12 Starchildren to achieve Nova powers in order to return Lamia's uterus so she could have a child. After the battle with Plague Master he dropped a few hints about this.

In Dark Woods II, Nostradamus conducted the plan and succeeded, with the help of Hein and his friends. Lamia's uterus was returned and she was made pregnant. Lamia almost was killed by Rai but Hein and Lily convinced him that she should be spared as she now finally has a child which they learned was the whole goal of their plan.

If the game was completed at 100% a secret ending was revealed after defeating Nostradamus. It showed Lamia giving birth in the circus tent to a girl with magenta eyes and hair, with the help of Rosie and Posie. The girl didn't cry and Lamia seemed to lose consciousness.

Between New Woods and The Plague Returns

In roughly two years in the human world, 10 years passed in the Dark Woods turning Ashley into a young girl. All this time she was being taken care of by Rosie and Posie because Lamia died after she turned two years old. She quickly got the upper hand over the two once she reached a certain age where she could think for herself. She trained a lot with her powers, especially the Nova ones, and became the most powerful being in the Dark Woods.

Ashley began making preperations to summon her father but quickly got alarmed that Hein and the others had infiltrated the Dark Woods to stop her, as informed by Rosie and Posie. Ashley assembled a team to stop the intruders. Throughout the game she bonded with Atra and Mors and saw them as her siblings, which was because they in reality were her father's essence. And so she was sad to see them gone but knew they were part of her father, the one she truly wanted to meet.

She mostly kept herself in the carnival, with Rosie and Posie as her bodyguards, but also made some trips outside of the carnival for her plans. Backstage at the carnival she had created a pentagram and needed the required things to summon her father including: his unlocked essence, some of Rosie and Posie's powers, the blood of his worst enemy a.k.a. Hein and an artifact from his past. She eventually succeeded in summoning him and was overjoyed.

Together they were planning to take out Hein and the others, but failed in the end. Nostradamus however displayed an act of good by saving his daughter from the enemies and send them back to the human world without a way for them to go back, as he explained that he wanted to spend his days with Ashley in peace, until they are approached by The Enemy that a war is coming.

When the Dark Woods is caught in a war of ownership between The Threat and The Enemy, Ashley seeks out help from Hein and the others, as they are the strongest persons they know. They explain the situation and how they turned around their values. She first trained a little bit with the others until Eight appeared and released all the creatures out of The Gate. They head back to the circus tent where it is safe.

After discovering that Pan was among the ones who escaped from The Gate and gone totally bonkers, Hein and Ashley decided to head to the swamp, with the guidance of Jane, to find a cure. There they fight the swamp monster, but recover the Whispering Flower that gets turned into a potion. When using it on Pan, it backfires, making him stronger. They fight and defeat him, although the final attack is landed by Nostradamus.

Afterwards Ashley decided to go with Lily and Rai to the fortress where because of the info that Eight might be there. The info was right as they encountered her there with several other creatures from The Gate. They battled Eight, but she got away after realizing that she needed them alive. After Eight fled the three split up to fight the runaway creatures. Ashley followed Chickember and engaged combat with her, eventually learning that she always was trapped with the same fate in Eden and hoped to change her future, but knows that she can't and comes to peace with her fate. She goes back to the circus tent afterwards.

Ashley goes on a venture with Ligeia next, heading to the top of the mountain in the Dark Woods to find out what kind of strong energy is coming from there. During their climb to the top they fight many monsters but also talk. They talk about how they are direct family of each other, and even joke about having the same hair color, but also about more serious topics like Ashley having no friends in the Dark Woods. She loves to be with her father, but longs for more social connections, and hopes that she can keep in touch with them after this is over, and even may make Dark Woods a nice place to live in. Once they reach the top they discover Isis in her true form, who says she is close to reaching her final form. The two battle her, but in the end get bested by her. Isis flies off, heading over to the circus tent to collect more souls.

Ashley quickly descends the mountain and meets up with the others to tell that Isis is heading to the circus tent to collect more souls. To her horror she discovers that Slime is dead and Isis had taken control over her father. She and the others fight Isis and separate her from her father. They fight Isis in her final form before eventually defeating Eight, who has been using Isis all this time, unbeknownst to her. Afterwards Ashley and Ligeia have another talk about that things will get better from this point, and that she should visit more often now that the Dark Woods and the New Fantendoverse are connected. Ashley agrees and says her goodbyes to the heroes after the Dark Woods are saved.

Ashley is a being born out of pure darkness to say. Despite her young age she is a very maleficent young girl who, once she sets her eyes on a specific goal, will do anything to achieve that. She doesn't have any mercy with others, unlike her parents, and does not hesitate to kill anyone in her way or useless to her. Through all that she is very childish and can get very upset when it doesn't go her way. Although she is the most powerful being in the Dark Woods she doesn't brag about it and doesn't even seem to realize it.

When going into her teens she has become a lot wiser about the world. She no longer seeks for the destruction of everything and is a lot more reasonable. She still keeps her evil intentions but doesn't express it the way she did before. Her childishness has been replaced by a typical puberty behavior. She can get upset and angry about the smallest things and often blames her father. In her teens she also seems to be very indifferent to everything.

Born out of the Nova powers makes Ashley one of the most powerful beings to ever existed inside of the Dark Woods. She is the very first person to have been born with the Nova powers by birth aside from Nova herself. She also takes the Nova powers as her main ability whilst her father keeps relying on Nocturn. Because she was raised by Rosie and Posie she was taught the powers of the plague. One of her hands was infused with the ashes of the plague giving her pretty much the same abilities as Rosie and Posie albeit on a smaller scale.

She appears as a playable character in Descend, where she fights with the deceased ghost forms of Rosie and Posie, who act as dual weapons of sorts. Most of her plague powers are configured into them, despite her still having the plague infused hand. She also uses her Nova powers, these being based on astronomical things in the Milky Way.

Ashley as she appears in Dark Woods III: The Plague Returns 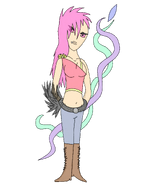 Ashley as she appears in Dark Woods IV: Descend

Ashley as she appears in Dark Woods: Survival
Add a photo to this gallery

Retrieved from "https://fantendo.fandom.com/wiki/Ashley_(Dark_Woods)?oldid=2440299"
Community content is available under CC-BY-SA unless otherwise noted.