Ash Ketchum is the main protagonist of the Pokémon anime series, as well as most animated Pokémon movies. A young 10 year-old training hailing from Pallet Town in the Kanto region, Ash is a Pokémon Trainer who aspires to attain the title of Pokémon Master. After oversleeping on the day he was to start his Pokémon Journey, Ash was forced to partner up with a Pikachu that would seldom listen to him and instead often shock his trainer. It was only once a flock of Spearow attacked Ash that Pikachu would come to care for his trainer after he decided to protect his Pokémon over himself. Ash is loosely based on Red, the protagonist of the original Pokémon Red, Green and Blue Versions, and Pokémon Yellow is inspired by Ash's travels through the Kanto region.

Despite the Pokémon anime focusing upon Ash's travels across the many regions of the World of Pokémon, Ash is seldom referenced in the Pokémon video game titles, as well as in manga series not directly based upon the anime series. Several of the Pokémon that Ash has captured throughout the series have been given out as Event Pokémon (with the original trainer of such Pokémon being stated as Ash or Satoshi) while a letter implied to have been written by Ash is included in the demo of Pokémon Sun and Moon that contains his Greninja capable of becoming Ash-Greninja.

Ash is named after Satoshi Tajiri, the creator of the Pokémon series, in the original Japanese version of the anime series. In the English dub, Ash's surname (Ketchum) is a reference to the franchise's original slogan: "Gotta catch 'em all!"

Heroes of the Greatest Destiny

Ash Ketchum and his Pikachu end up having to save their world from a powerful mist that turns characters into evil worshippers of the game's villains, Bowser, King K. Rool, Dr. Eggman, Annie and Oakley. After being knocked out by Iris and Cilan's Pokémon and waking up sometime later, Ash (along with Pikachu) finds himself making an alliance with Mario, Donkey Kong, Sonic the Hedgehog and a mysterious being called the Mist Breaking Star. Ash and Pikachu's main enemies are Annie and Oakley's sisterbots, brotherbots and evil Pokémon. 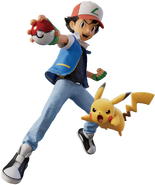