Along with Zapdos and Moltres, it is one of the three Legendary birds of Kanto.

Articuno is a large avian Pokémon with predominantly blue plumage and large wings said to be made of ice. It has a head crest that consists of three, darker blue rhombus-shaped feathers on its forehead and circular red eyes. Its beak is short and gray, and its long, thin legs are gray. It has a long, streamer-like tail that is longer than its body and the same shade of blue as its crest.

When Articuno flaps its wings, it can chill the moisture in the air around it, making snow fall. It flies from icy mountain to icy mountain. According to legend, it appears before doomed travelers lost in icy regions. As seen in the anime, Articuno sometimes aids travelers and guides them to safety. Articuno lives in cold, isolated locations, such as mountain peaks.

This Pokémon's appearance is based on the Simurgh, deriving from the Persian رخ rokh, which is that of a giant arctic bird. Also, its long tail and small body may be reference to the rare bird, the quetzal. It is also anatomically very similar to the White-throated Magpie-jay.

Articuno is a combination of arctic (far northern regions of the globe) and uno (Spanish for one, indicating that it is the first in the series of Kanto Legendary birds).

Freezer is literally freezer (that which freezes). 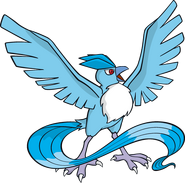 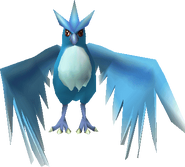 Generation VI
Add a photo to this gallery
Retrieved from "https://fantendo.fandom.com/wiki/Articuno?oldid=2147615"
Community content is available under CC-BY-SA unless otherwise noted.